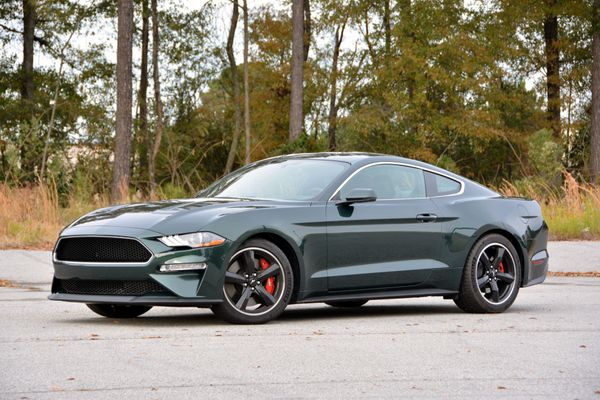 Buy this Bullitt Mustang for its collectibility, and drive it for its performance.

From the Back To The Future DeLorean time machine to James Bond's tricked-out Aston Matins, most noteworthy star cars built for television and movies had some sort of gimmick to stand out. All the 1968 Ford Mustang GT needed to become a movie car icon in Bullitt was Steve McQueen behind the wheel and about seven minutes of uninterrupted screen time.

Following the cult status of the 1968 Ford Mustang GT from Bullitt, Ford created three distinct Bullitt Mustangs over the years: the 2001 Mustang Bullitt GT, the 2008-09 Mustang Bullitt and, most recently, the 2019-20 Mustang Bullitt. The latter promises more power and arguably better styling than the other modern Bullitt interpretations, so I was eager to slide behind the wheel of the newest Ford Mustang Bullitt for an entire week.

Before we talk about the car, let's talk about the epic and groundbreaking chase scene. This movie premiered back in 1968, and 52 years later, enthusiasts are still talking about it today. If you need proof of this, just look at the fact that the original Bullitt movie car set a record auction price earlier this year – a record that was recently broken again by the $3.85 million Shelby GT350R Prototype. It wasn't just the Mustang or McQueen, but it was the rawness of the chase with including the camera angles, revving engines and screeching tires.

As you can see in the above images, Ford replicated the look in 2001 and again in 2008, and while the current Bullitt Mustang would've been just as exciting on its own, this car was introduced around the same time Ford was launching performance vehicles like the Focus RS, Shelby GT350 and second-generation versions of the Ford Raptor and Ford GT. Staying as close to the original movie Mustang as possible, the 2019 Ford Mustang Bullitt is only offered in the fastback body style (no convertible), and other than a one-off Kona Blue Mustang Bullitt built for charity, these cars are only offered in the the exclusive Dark Highland Green (to match the movie car) and Shadow Black; honestly, what is the point of buying a Bullitt Mustang in any color other than dark green?

With the exception of the Mustang emblems on the wheel center caps and the fake gas cap at the rear of the car showing off the Bullitt logo, all of the badges have been removed for an understated look; even the fog lights and rear spoiler were deleted. The black five-spoke wheels are also a part of the Bullitt's unique look, and the dark colors really make the red Brembo calipers pop. The part I appreciate most about this car's look is that the average Joe could walk right by this car and think it's just another Mustang, but to true car lovers, it will make their heart start to race!

What really makes the 2019 Ford Mustang Bullitt worth the price of admission is its unbridled performance. There's still a 5.0-liter Coyote V-8 under the hood, but like the previous two Bullitt recreations, Ford brought a little more power to the party. Thanks to a modified GT350 intake manifold, revised PCM calibration and a larger radiator, the new Bullitt is good for 480 horsepower and 420 lb-ft of torque. That's a 20-horsepower compared to a standard Mustang GT, and the higher power output increases the Bullitt's top speed up to 163 mph.

True to the '68 Bullitt Mustang, this model is only offered with a six-speed manual gearbox that is topped with an amazingly cool cue-ball shift knob. This transmission is key to maximize fun in the Mustang Bullitt as you'll want to get the car as close to its 7,400-rpm redline as possible... as often as possible. That's where Ford's efforts on this car payoff the most as engineers did an amazing job of matching this car's exhaust to the movie car's. This exhaust note was achieved by giving the Bullitt a standard Active Valve Performance Exhaust system.

More than just a good-sounding car, the Bullitt receives the same suspension setup as the GT Performance Package, and this tester was equipped with the optional $1,695 MagneRide Dampening System. This system uses electronic dampers that read road conditions – 1,000 times per second for each damper – to optimize the car's overall feel and responsive and deliver a smooth, balanced ride. That means this Mustang can carve up the back roads  just as well as it can handle daily driving... such as chasing down a black Dodge Charger through San Fransisco streets.

The interior of the Ford Mustang Bullitt is everything you'd expect from a $50,000 Mustang, and the design creates enough of a distinction worthy of a collector car. This car comes standard with leather seats and a high-tech 12-inch LCD digital gauge cluster, while features such as the 12-speaker B&O Play Premium Audio System, three-setting memory driver's seat and a voice-activated navigation system were included in the $2,100 Bullitt Electronics Package.

Matching the exterior, the Bullitt adds unique touches such as black leather with green stitching, Bullitt logo on the steering wheel, aluminum door sill scuff plates and a chassis number badge above the glove box. Recaro sport bucket seats are available as a $1,595 option, but this car came with the standard leather seating. It still provides plenty of bolstering, but it is far more comfortable in daily driving.

The 1968 film Bullitt is often regarded as having the greatest movie car chase of all time, and the 2019 Ford Mustang Bullitt lives up to the legacy of not only the movie but also the Mustang and Steve McQueen himself. Combining the added performance, styling and limited-production, this Mustang Bullitt is easily one of the best Mustangs ever built.

From the start, Ford only planned to make this Mustang Bullitt for two years, but don't mourn the loss of this incredible Mustang just yet. As Ford did after phasing out the 2001 Bullitt, Ford is planning to follow up this special version of the Mustang with the 2021 Mustang Mach 1.

Considering the added performance, mean looks and limited production, the 2019-20 Ford Mustang Bullitt is an instant collector car. These cars started at just under $47,000 with the one you see here costing just over $51,000 with optional equipment, and it is worth every penny!