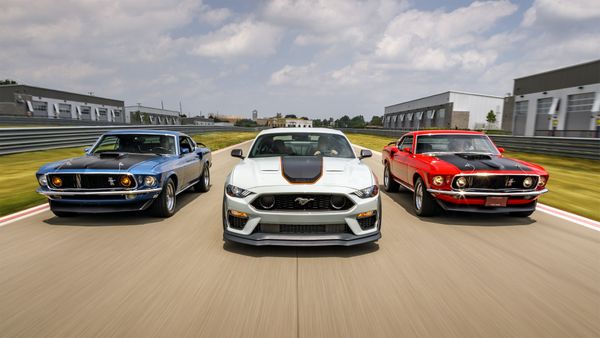 Meet the most track-capable 5.0-liter Mustang of all time!

It's been 51 years since Ford first introduced the Mach 1 Mustang as a bridge between the standard GT and the tuned Shelby, and when it goes on sale early next year, the all-new 2021 Ford Mustang Mach 1 will serve the same purpose. This Mach 1 combines retro styling cues with performance upgrades from the Bullitt Mustang, Shelby GT350 and even the Shelby GT500 to create the most track-capable 5.0-liter Mustang of all time.

Like the first three generations of Mach 1 Mustangs, the 2021 Mach 1 gets improved performance, handling and style, and that starts under the hood with an upgraded version of Ford's 5.0-liter Coyote V8. As a step up from the base Mustang GT, the new Mach 1 adds components developed for the Shelby GT350 such as the intake manifold and engine oil cooler to improve output to 480 horsepower and 420 lb-ft of torque – matching the output of the limited-production 2019-20 Mustang Bullitt. Unlike the Bullitt, the Mach 1 is available with the Mustang's 10-speed automatic transmission, but true performance enthusiasts will certainly opt for the six-speed Tremec manual gearbox equipped with rev matching and short-throw shifter.

In terms of style, the new Mach 1 will have an imposing presence just like the original, but it will not offer a shaker hood. This starts with an exclusive front end that features added air intakes under the turn signals, a larger front splitter and dummy fog light housings. An underbelly pan increases aerodynamics as well as brake cooling flow, and the rear of the car adds the rear diffuser and rear spoiler (with Gurney flap) from the Shelby GT500. Of course, a reflective graphics package is included in this Mach 1's design, and these stripes will be offered in three colors (red, white and orange) to complement the eight (Fighter Jet Gray, Iconic Silver, Shadow Black, Oxford White, Velocity Blue, Twister Orange, Race Red and Grabber Yellow) exterior paint colors that will be available. Sadly,

The 2021 Ford Mustang Mach 1 goes on sale early next year, and while pricing hasn't been announced, expect it to come in right around the $50,000 price range similar to the 2019-20 Mustang Bullitt.