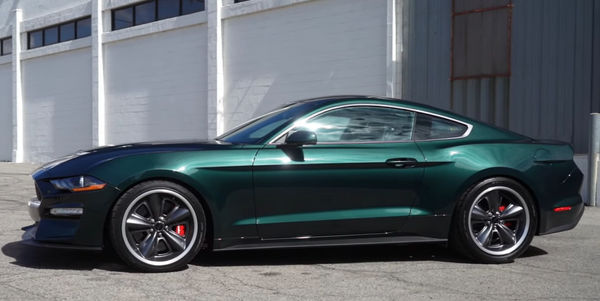 Wait until you see what this thing can do.

There have been some pretty cool Ford Mustangs made in the last 50-plus years. But out of that stable of ponies, the Bullitt Mustang models are most definitely some of the biggest highlights. And while the latest one certainly isn’t a performance pushover, Steeda has boosted it to the next level.

This car is called the Steven McQueen Edition. Steeda actually got together with Chad McQueen, the son of the late movie star, to create a pony car worthy of such a legendary name. You’ll note the wheels are different than on other Bullitts because they’re one-off Steve McQueen Edition wheels and they’re pretty cool.

With 775-horsepower on tap, this is the Bullitt Mustang that will eat Dodge Demons for lunch. Bolted up to the Coyote 5.0-liter V8 is a big Whipple supercharger, squeezing more power of the block than what you get with the new Shelby GT500. That’s pretty impressive work done by Steeda.

To really wring everything out of this car, there are some extra goodies like a short-throw shifter and clutch spring assist. Yes, that’s right, Ford said it couldn’t offer the GT500 with a manual transmission because it was too powerful or some nonsense and we all knew was an excuse. This car, along with many others, proves that’s true.

Stereotypes about Mustangs are they love to aim for crowds, or at least they handle like a drunk sailor. Upgrades to the suspension on this car help to reign in all that extra power so you hopefully aren’t going sideways, unless you’re trying to drift. Bigger rear tires/wheels and subframe connectors also help to literally keep the rubber to the road.

Obviously, these cars are going to be collectibles out of the gate. Each one comes numbered and has a plaque, plus some nice interior touches like doorsill plates and embroidered floormats. The cost of the upgrades is at least $20,000 plus you have to supply the vehicle.