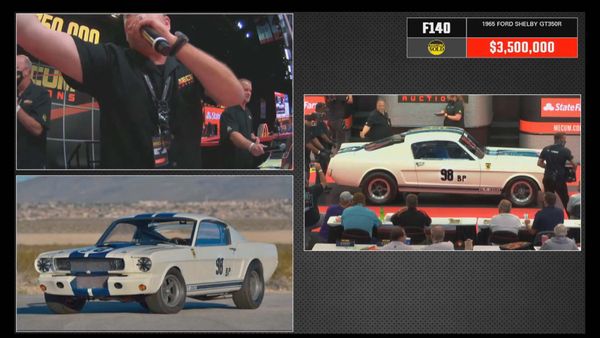 The most historically significant Shelby Mustang in the world sold for $3.5 million!

This Mustang was created to be the Shelby American factory racing team car as well as a test mule for the development of the production Shelby GT350R, and it was driven, raced and tested by legendary names such as Ken Miles, Bob Bondurant and Peter Brock. This racecar had more than 10 first place finishes in its first year of racing including its first outing on February 14, 1965 at Green Valley Raceway with Ken Miles behind the wheel.

In March 1966, Shelby American sold this car to Ford Performance engineer, Bill Clawson, for $4,000 who continued to race the car, and after an engine failure, he transplanted a racing-spec Ford GT40 experimental engine. Four years later, Clawson later sold the car to a buyer from Mexico where it was raced for another two years before being painted gray and parked until 1989. It changed hands a couple more times after that, but it wasn't until 2014 when this legendary Mustang finally received the restoration it deserved. This car has been shown at Pebble Beach and Amelia Island, and it was displayed at Ford's global headquarters as well as the 2016 Detroit Auto Show.

Unlike the circus surrounding the auction of THE original Bullitt Mustang, which broke a Mustang sales at $3.4 million back in January, the auction for this Shelby Mustang was surprisingly low key. The auctioneer optimistically started bidding at $5 million, but the car didn't get its first bite until $1 million. From there, bidders slowly pushed the price up to a now-record hammer price of $3.5 million resulting in a total price of $3.85 million after buyer's fees.