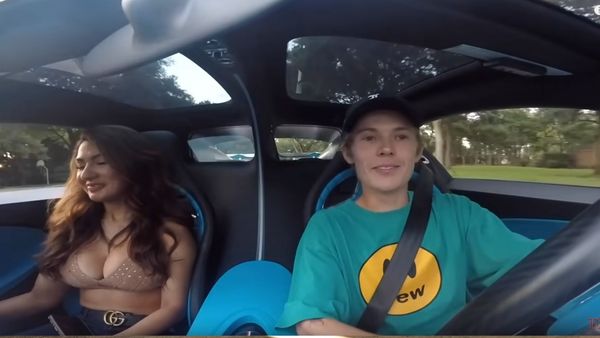 And he takes one out to pick up on women…

YouTuber Tanner Fox is apparently 20 years-old, even though he looks a lot younger. He’s been doing a series where he switches lives with the son of a billionaire, something a lot of people have fantasized about. In a video he uploaded recently, Fox is hanging out in a big mansion in Texas and driving several European supercars, including a Ferrari LaFerrari and a Bugatti Chiron.

For Fox this was literally a dream come true. He admitted his wildest fantasy was to drive a LaFerrari, the gas-electric hybrid supercar which has wowed many. The vehicle is also worth about $1.5 million. And while we haven’t had the privilege of driving one, we can attest that these Ferraris look even better in person than on video.

Even more extreme is the Bugatti Chiron, which costs about $3 million brand new. Technically a hypercar, you don’t see too many of these around. An 8.0-liter W16 is force fed by four turbochargers, pumping out a thunderous 1500-horsepower.

Of course, with all that power at his disposal what does the kid do? He picks up a woman who probably would otherwise ignore him at best. Then he stammers through trying to play off that the Bugatti is his.

The big question we have is if Fox had crashed either car, what kind of insurance nightmare would the owner be facing? Maybe we’re just too grown up or have had to deal with car accidents and other responsibilities in real life, but you’ve got to think about that stuff before handing the keys to your high-powered, extremely valuable European exotic to a 20 year-old.

We’ll warn you, seeing kids playing with expensive toys and acting like it’s nothing can be triggering to some. If you feel it will just enrage you, we have plenty of other amazing articles to check out, so click here or here or here instead.