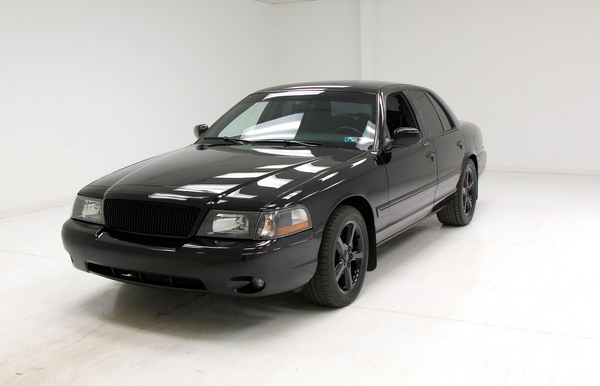 Let's talk about why this modern collectible will always turn my head.

As car people, we all have our own preferences and biases about which cars we like, some more general than others, and then we have the cars we're not even sure why we like. When I was a younger adult, I never saw myself driving anything that didn't have 2-doors, unless it was a truck-platform SUV (out of necessity), and now I've taken to driving a 4-door modern muscle car that most people think is a cop car upon approach. So maybe secretly wanting a Mercury Marauder isn't that much of a stretch. It falls in a category of four cars I love, but wouldn't own: GNX, 442, 90's Impala, and the Marauder.

My grandmother owned a Grand Marquis, a car I technically learned to drive on, so maybe this is where the appreciation comes from. The first time I took that sailboat out for a ride, I almost put it in a ditch in Pensacola, which would not have a good look on my mom for letting a 14-year-old drive her to the beach from my grandma's house. That being said, the Marauder is not your grandmother's Mercury. The Marauder is the coke-addicted version of your grandma's Grand Marquis.

Before getting too mad at that assesement, the name "Marauder" literally means one who searches around for something to steal. You might hear stories of someone who goes through neighborhoods and breaks into cars, who travels around looking for things to pilfer, that's what marauder means, so Mercury knew what they were going for when they designed this car.

The sinister looks of the Marauder are the first thing that stands out about this car. Everytime I see one, my mind goes back to the movies I grew up on that painted the story that the car you drive told us exactly which character you were in the movie - The bandit? The bad guy? The hero rouge detective who just wants to clear his name? The Marauder is just one of those cars that drums up a judgement (neither good, nor bad) about the driver.

So besides just seeing one when I was 16 and thinking they looked like they were being driven by a dirty cop or someone fleeing a bank robbery, the car itself is pretty facinating. The Maraduder was premiered at SEMA, of all places, as a concept car in 1998. It sported a blown 4.6-liter, but the version that hit the road in 2003 didn't sport the same 335-horsepower powertrain.

Mercury's land yatch did come out with a fairly potent  302 hp/318 lbs-ft, but that doesn't equate to particullary swift movements, considering the car's considerable gurth. In case you're wondering what that equates to in real life, it's a mid-7 second o-60 mph sprint, and a quarter mile ET of 15.6-seconds at a very slow 94 mph - so it's not fast, but in all fairness, it wasn't that slow either.

Since the car was basically reverse engineered, made in low-production, shared the Mustang Cobra's powertrain, and was only available in limited colors it's an easy choice for this week's modern classic highlight.