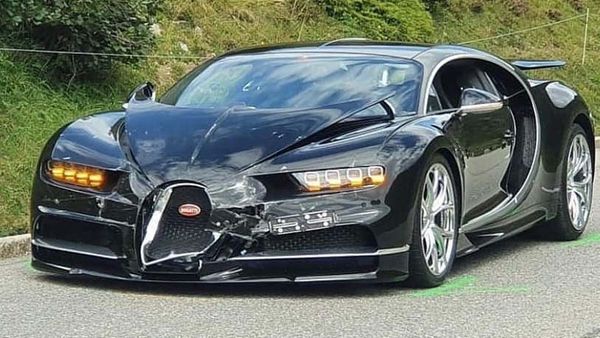 Always check your mirrors when passing!

It happens to all of us. We find ourselves driving along a beautiful stretch of scenic back roads when out of nowhere, we come upon a slow-moving vehicle whether it's a semi truck, motorhome or, worst yet, a Prius. That was the case with this Bugatti Chrion as it was being driven along Switzerland's scenic Gotthard Pass, but as you can see in these pictures, things went from bad to worse.

According to reports, the Bugatti was among a group of cars stuck behind the motorhome along with a an impatient driver of a Porsche 911 GTS. As the multi-million dollar hypercar committed to passing the traffic, the Porsche 911 pulled out in front of the Chiron and began to pass as well. While the details aren't clear, it appears that the Bugatti may have rear-ended the Porsche causing the 911 to lose control and hit the motorhome and a Mercedes-Benz station wagon.

The Bugatti Chiron, which cost about $3 million brand new, only suffered relatively minor damage to its nose and hood, while the 911 GTS is likely totaled to the heavy damage it suffered. This accident is a lesson to always check your mirrors when passing and give other motorists plenty of space, but with 1,500 horsepower at its disposal, the Chiron is able to accelerate from 0-60 mph in just 2.3 seconds, it's just likely that the driver of the 424-hp Porsche saw the Bugatti but didn't expect the car to gain as quickly as it did.

Despite the Porsche's obliterated front ed, the spun Mercedes and the concrete road barriers that were knocked over, it's amazing there are no reports of severe injuries coming from this accident.