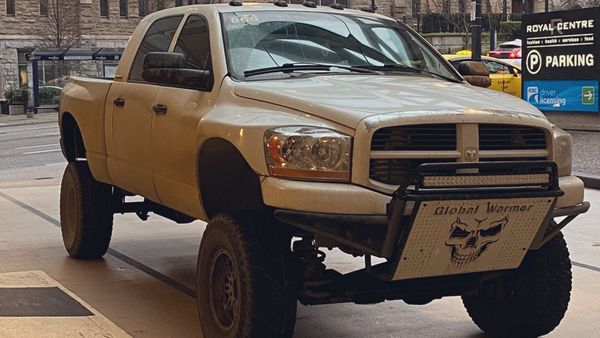 A politician in Canada has found himself in hot water after going off on a Twitter rant about modified trucks’ “glorification of violence and domination.” Mathew Bond, District of North Vancouver Councilor, describes himself as “passionate about next-generation solutions for transportation and cities” which apparently doesn’t include lifted or otherwise modified pickups. His tweet got ratioed hard as people dogpiled on what they perceived as not just a ridiculous statement but a borderline threat toward their hobby and way of life.

At first you might think these Twitter users were overreacting to an admittedly ridiculous statement made by a politician on the social media platform. But one has to keep in mind we live in the days where a simple statement by a politician can be construed as sedition or inciting a riot, so a precedent has been set. Also, Twitter has become the online town square some people take quite seriously, especially politicians.

Accompanying Bond’s original tweet, which became a long and preachy thread, was a photo of a lifted Ram with a prominent front skid plate which reads “Global Warmer” with a grinning skull below. That lighthearted reference to certain people hand-wringing about anyone driving a big pickup truck seemed to have triggered the politician as he decried “glorifying global warming.” Not once did he stop to consider perhaps those who drive full-size trucks are tired of being relentlessly demonized. He also forgot to grow a sense of humor.

Instead, Bond took the low road and decided to insult the intelligence and education level of anyone who dares to drive a vehicle he doesn’t personally like or question his opinion on the topic – you know, a typical elitist stance people are increasingly growing tired of hearing. This has been a ploy of many politicians and others trying to paint anyone who opposes their viewpoints as ignorant, uneducated, and anti-progress without truly explaining their statements and logic.

Before you start thinking Bond just hates pickup trucks in general, he did go on to admit they have their place: rural areas. Yep, keep yer Ram, Silverado, and F-150 out of sophisticated cities and even suburbs where only microcars and other vehicles deemed worthy by Bond himself are allowed to drive on public roads.

Bond decided to then rant about “designing or modifying” trucks to “be more dangerous to others” as irresponsible. You heard that right, your brush guard, skid plates, and mud tires have only one purpose: killing and maiming others. There is no other reason to have such mods on a truck, at least according to this genius.

Usually one’s vehicle choice isn’t criticized directly by a politician, but there are those rare times when that is the case. This particular politician didn’t back down when he was called out or even walk back his claims one bit. Instead, the guy leaned in hard, acknowledging he was being torched for what were obviously ridiculous statements as he tried defending them as rational by attacking the integrity of other Twitter users. Then he launched into a lesson about modern trucks already being larger and more powerful than at any time in the past, as if he were sharing a little-known nugget of information, which to him means obviously nobody should be modifying them. It's an interesting argument he never fully fleshed out, since taking offense at personal attacks seemed to be his main priority.

A few of Bond’s fellow Canadian politicians, who are known for their rugged and practical nature, did come to his defense. One went so far as to reply with “Sigh” in a powerful message of solidarity. And now you know why you shouldn’t lift or otherwise modify your modern pickup truck, cretin!