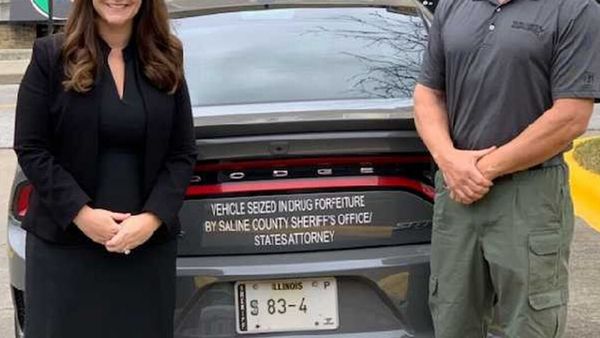 Don’t try to outrun these cops…

Not too long ago we covered a police officer in a Ford Police Interceptor uselessly trying to catch up with a Dodge Challenger Hellcat on the highway, the muscle car pulling away with ease and disappearing before the chase is called off. The video potently showed how slow most police vehicles are when compared to serious muscle cars. Then we ran across this story of how the Saline County Sheriff’s Office has started using a 2018 Dodge Charger Hellcat it seized during a drug arrest.

For those who don’t already know, Saline Country is in Illinois, so if you’re going to be traveling through there be aware there are cops in a Hellcat. Running from this car or even running from any deputies could mean a Hellcat in hot pursuit, which probably won’t end well for you.

Officially, the Saline County Sheriff’s Office says it will use the Hellcat for drug enforcement and patrol activities. That could mean any number of things. Just so people don’t think they’ve been spending taxpayer dollars unwisely, there’s a rear decal that reads “Vehicle Seized In Drug Forfeiture.”

We get some people really don’t like seeing vehicles seized by law enforcement like this. According to a local story, the guy who was driving it was charged with Unlawful Possession of Cannabis With Intent To Deliver, a Class 1 felony, as well as Unlawful Possession Of Cannabis 2000-5000 Grams, a Class 2 felony. Using the Drug Asset Forfeiture Procedure Act, the Saline County Sheriff’s Office moved to have the forfeited and turned over to them.

Some will say it’s a lesson in why you don’t traffic and deal drugs, while others will argue these laws have been abused, even if not in this particular case. That’s the beauty of this country is people can debate these points. We’re just interested in the fact a law enforcement agency has a Hellcat and what exactly they plan to do with it.