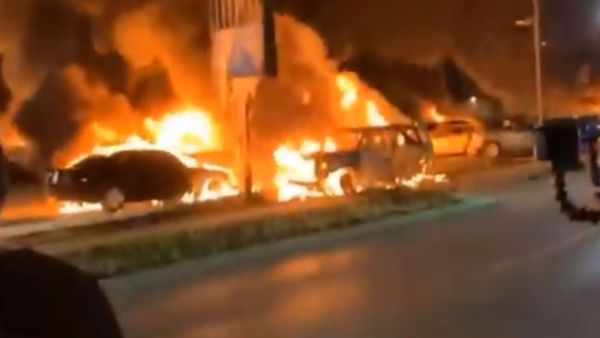 This is going to cost all of us eventually…

Journalists took to Twitter late Sunday night to post horrifying videos of a car dealership in Kenosha, Wisconsin on fire. Dozens of cars can be seen ablaze in the numerous videos, gas tanks suddenly erupting to spread the flames further. Also heard in the background is gunfire, showing that the situation was completely out of control.

The Milwaukee Journal Sentinel reported that protests turned into riots late Sunday night. Despite police declaring an emergency curfew until 7 am, rioters continued to run amuck throughout Kenosha, looting and burning numerous businesses.

Video shows looters breaking into the dealership office as people call out for keys to certain cars. Others took to stomping on hoods and smashing windows. We’ve seen this type of behavior before and the end result was muscle cars were stolen, taken for joyrides, and later dumped. In this case, people in the video scatter once they hear police sirens in the distance, but the night wasn’t over.

After 2 am the car dealership, which is located on Sheridan Road, was targeted again by rioters. It started with a single truck set on fire. A video posted to Twitter showed a live flare thrown into the back of an SUV, but it’s unclear if that’s how the dealership fire started.

The fire appeared to spread quickly, because by 2:50 am when the local fire department arrived to extinguish the flames it was a raging inferno. It appears that firefighters weren’t able to reach the dealership until it was too late. Now the family-owned business looks to be a total loss.

Video of the car lot looks worse than many salvage yards.

While it’s devastating to see someone’s business destroyed, there are further-reaching effects everyone will feel from this and other riots which have targeted dealers and privately-owned cars. Thanks to low new car inventories with auto factory shutdowns and diminished output, shoppers have been turning to used vehicles. That in turn has caused used car prices to spike. But as more cars are senselessly destroyed, the cost of pre-owned vehicles will only continue to increase.

Thanks to the rising value of used cars, the coronavirus lockdowns, plus the scarcity of car parts, we’ve seen car theft on the rise nationwide. In other words, destroying cars will only make the situation worse.

Many residents interviewed said they couldn’t believe such violence had broken out in Kenosha, a place they previously had perceived as safe. Other buildings confirmed to have been damaged in the rioting included the public library, a dinosaur museum, charter school, law firm, USPS building, and the courthouse.