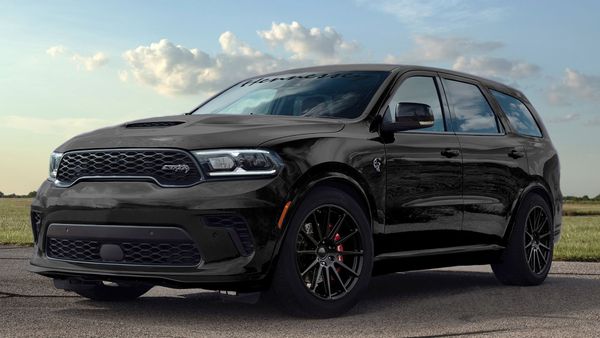 People have been fantasizing about shoving the Hellcat into just about every vehicle in the Fiat Chrysler family. And while the Dodge Durango isn’t the craziest target for such a project, the fact it’s a people hauler does add a certain twist to the 2021 Dodge Durango Hellcat. While having 710-horsepower should be plenty for making it to the summer vacation spot or a ballet recital in record time, for some that’s just not enough. That’s where Hennessey Performance comes in with its Durango SRT Hellcat HPE1000 offering.

As you probably already guessed from the name, the three-row SUV is pushing out over 1,000-horsepower (it’s 1,012-hp to be exact). It also has on tap a monstrous 969 lb.-ft. of torque so you’ll be best friends with the guys at your preferred tire shop.

Of course, there’s been a growing market for these extremely powerful and quick three-row SUVs, mostly fueled by European brands trying to attract adrenalin-junky families. This build from Hennessey is quite spectacular, considering the company claims a 0-60 time of 2.8 seconds and a quarter-mile run of 10.8 seconds at 126 mph. Those are some serious performance chops.

To boost this three-row SUV to such heights, the Texas tuner shop installs a number of upgrades. One of the biggest is a new supercharger system and high-flow air induction system to cram more air into the cylinders with each compression stroke. High-flow fuel injectors capitalize on the extra oxygen.

What goes in at a higher rate must come out at a higher rate for a true performance boost, so the conversion also includes stainless steel long-tube headers, high-flow catalytic converters, and a crank case ventilation system.

Hennessey Performance says it will only make 50 of these 2021 Dodge Durango SRT Hellcat HPE1000 SUVs. In other words, if you want one you’ll have to hurry up and reserve yours before all those build slots are taken. No doubt, at least a few are going to investors who will immediately flip the go-fast family haulers, but you’ll be paying a big premium to be the second owner.

Pricing hasn’t been announced yet, but considering the base vehicle comes at a dear $82,490 you’re easily looking at a 6-figure cost out the door.