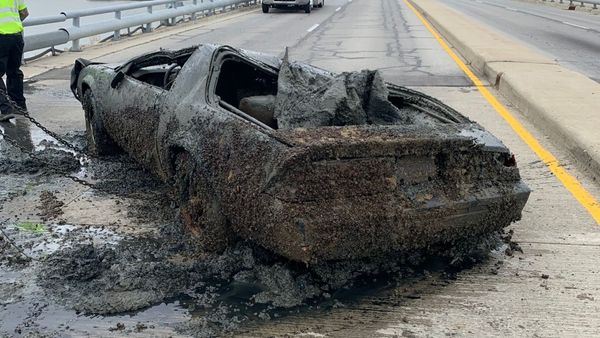 It was reported stolen 32 years ago.

Back on July 8, 1988 the owner of a 1987 Chevrolet Camaro reported to police in Indiana that his car had been stolen. After over 3 decades nobody thought the muscle car would be recovered, but a chance encounter by two fishermen on Geist Reservoir has uncovered the watery grave. It’s not the happy ending perhaps the owner had dreamed of in the past, but at least now there can be some type of closure.

According to Fishers Police’s Twitter account, the Camaro was recovered not too far from a marina and underneath a bridge. The fishermen were using a sonar device when they spotted the car upside down under several feet of silt.

The fishermen called police, which sent a dive team into the water to investigate. Then they called a towing service to recover the 80s American muscle car. As we’ve seen in other river and lake recoveries, the process can be difficult and dangerous, but they were able to extract the vehicle without any reported problems.

It’s always amazing to hear these stories of cars sitting underwater in popular areas for decades without being detected. Pretty much anywhere with a considerable number of bodies of water has these sorts of stories, with one river in the Portland, Oregon area famous for its large stash of vehicles ditched near a boat ramp, most of which have been recovered by a dive team there.

Just as important, no dead bodies were found inside. That’s not always the case, so it’s great to hear when just a car is recovered.

Sadly, the owner of the ’87 Camaro is now dead. It’s not like he could drive the car down the highway again, but it might have been nice for him to know what ultimately happened to a muscle car he no doubt cherished when it was brand new.