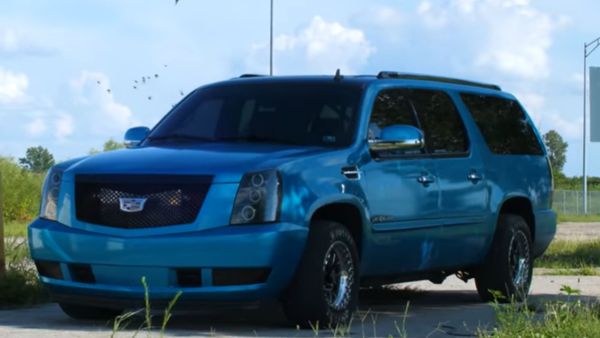 This bling wagon will smoke your muscle car in the quarter mile...

Fast SUVs used to be a rarity, with the GMC Typhoon being one of the few on the market. Then the Germans started to get into the high-powered, fast SUV game with Porsche, Mercedes, and BMW really duking it out. Now there are quite a few high-powered, go-fast SUVs on the market, but Cadillac still hasn’t jumped into the arena for reasons we don’t quite understand. After all, the American luxury brand talks nonstop about “taking it to the Germans” and such but it won’t even drop some sick powertrain in the Escalade. Well, thankfully someone did, because quite frankly it’s a move that’s way past due, and this twin-turbo Cadillac Escalade is pretty awesome.

Is anyone at GM reading this? Can you take notes and pass this up the bureaucratic chain? Something along these lines would be a huge wake-up call to consumers, at least we think so.

We know what you’re thinking – Motorious is really into muscle cars, classics, hotrods, and the like but not tricked-out Escalades. Normally you’d be right. We weren’t rocking one with spinner rims back in 2007 and we certainly don’t get all worked up over one of these luxury barges now, but there’s no denying this build Escalade is something special.

Not convinced? Consider this: under the hood of this luxury SUV is a built 427ci LSX V8 as well as a pair of huge Precision turbos. Supposedly, the setup could be tuned to 1,600-horsepower. At the moment the owner says it’s pushing 1,200. And it’s supposedly a 9-second car. No, really, this big ol’ brick can really get moving. It also has a full roll cage installed. Still not convinced? Watch the video and you might change your mind.

The video starts out the right way, giving you onboard visual and audio of the twin-turbo luxury SUV really going for it. That should strip away at least some hesitance anyone brave enough to click on the video might have. Of course, the haters won’t even get that far and it’s really their loss.