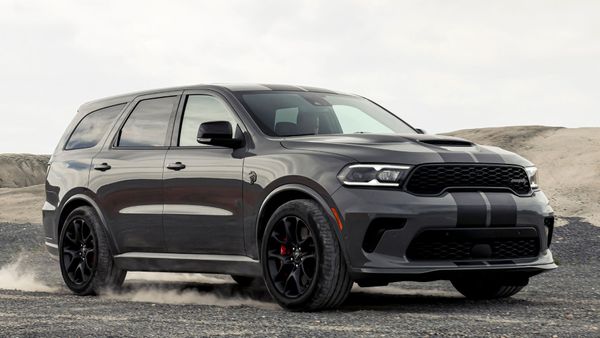 We’ve said before that Dodge muscle cars are like catnip for criminals, yet some people laughed. Obviously, we weren’t joking and the evidence to prove us right just keeps piling up. While car theft in 2020 has been skyrocketing, thanks in large part to the COVID-19 government shutdowns, we’ve seen Dodge muscle cars targeted especially hard. But now we have the first piece of evidence that the new Mopar super family hauler, the 2021 Dodge Durango SRT Hellcat, is also a theft magnet.

If you’re thinking the new Durango Hellcats haven’t even hit dealerships yet, you’d be correct. In fact, none have rolled off the production line. However, there are some pre-production SUVs out there in the hands of Fiat Chrysler employees so they can get better feedback on how they work in the real world. That’s how one was stolen right out of the driveway in front of an FCA employee’s house on a Sunday morning recently.

It took the 2-man crew just 3 minutes to swipe the Durango Hellcat. While the GPS was tracked to somewhere in Detroit, a Facebook post by the FCA employee indicated it hadn’t been recovered yet.

This just tells us the Dodge Durango Hellcats are going to be crime magnets like the other Hellcats. That’s not really shocking, but it’s surprisingly how quickly one was stolen. We suggest if you’re planning on buying one that you take extra precautions to keep it safe.

The biggest single incident of Dodge Hellcat theft we know of so far this year was when looters swiped 74 vehicles from a Dodge dealership in San Leandro, California, many of them Hellcats. Many of those vehicles were eventually recovered, but they were severely damaged.

We’ve reported on other Hellcat heists from dealerships, which usually end poorly. Sadly, Hellcats have also been stolen from private citizens, costing them dearly, even with insurance covering some costs. Criminals are pretty determined to steal Dodge muscle cars, even resorting to prying open the sunroof or unsuccessfully driving them through dealership showroom doors.

One of the top reasons for criminals wanting to steal Dodge muscle cars is the monstrous horsepower they boast. It’s no secret how hot these cars are, and it seems like the Durango Hellcat will be regarded by the wrong element exactly the same way.