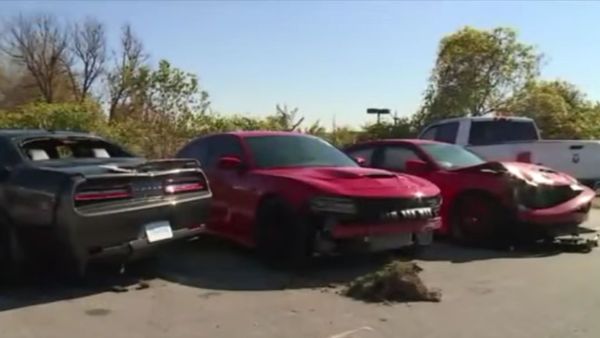 When it comes to Dodge Hellcats, it’s not just legitimate people who lust after them. They seem to be the favorite target for criminals, whether they just want to joy ride in them, use one as a getaway car, or are looking to sell the high-powered muscle cars illegally. Perhaps that’s at least partly why three teenagers from Kansas City drove about three hours (in a Hellcat it would be under two hours) to St. Peters, Missouri outside of St. Louis to steal two Dodge Hellcats and two other Dodge muscle cars from a local dealership.

Like we’ve seen all too often, these teenagers’ eyes were bigger than their brains or at least their driving skills, because they crashed three of the cars close to the dealership, totaling the two Hellcats. Not everyone can handle 707-horsepower sent to the rear end of a heavy muscle car since it’s a whole different experience from driving your mom’s Nissan Altima.

These guys were 16, 17, and 19 years-old at the time they stole the cars. No doubt they had zero experience with real muscle cars, something they seem to have in common with Doug Demuro. A fourth teen was able to get away with a Dodge, which wasn’t a Hellcat but police didn’t say what it was. Maybe he was the wise one who grabbed the keys to a Journey, something he could actually handle?

Even though this crime happened four years ago, it’s still relevant today. Pretty often, Dodge dealerships get hit by criminals looking to score a joyride in an expensive, high-powered muscle car. In fact, Dodge dealers have been the targets in recent rioting. We just have to ask, how can thieves get to the dealership keys so easily once everything’s shut down for the night? Why hasn’t Fiat Chrysler and the dealerships found a more secure way to store them? This is obviously going to continue being a problem until security is beefed up big time.