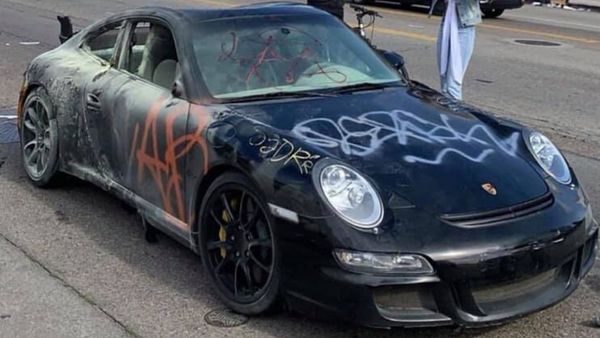 What did this amazing machine do to deserve such a fate?

Just when we think the car carnage as well as the other senseless damage being done across the country might come to a halt, we run across yet another high-performance German car being trashed by looters. This Porsche 911 GT3 RS was left parked in the middle of Beverly Blvd in Beverly Hills, California down the street from the Beverly Center, spray painted, obviously beaten in multiple areas with something like a bat, windows broken out, rear wing torn off, and then finally torched. We’ve been covering the senseless destruction, theft, and joyriding of high-end cars during the riots across the United States. Also, we’ve touched on the serious damage done to car dealerships. As car fans and proponents of hard work, these images are almost too much.

Some are calling into question if this is a genuine 991 GT3 RS. They say it doesn’t have some of the characteristic elements on it. If you see the pictures before it’s burned out, it’s apparent that’s exactly what this car is. Also, you can see the badging on the rear. These cars are rare and special, being quite capable of taking down many of the top supercars on the track.

On top of that, the GT3 RS is pricey with an MSRP of about $188,550. Nobody paid that little for the car because Porsche is the master of upselling options, so this burned-out husk likely sold for north of $200,000.

Where this car came from isn’t clear. There are no dealer plates on it – in fact there are no plates at all. It could’ve been stolen from a dealership and taken for a joy ride, something we’ve seen far too much of lately. But it is possible some poor sap owns the car and is now filing an insurance claim. Either way, it’s a huge financial loss that will be transferred in ways we’re positive the looters don’t know about and likely don’t care about, unless it somehow affects them directly.