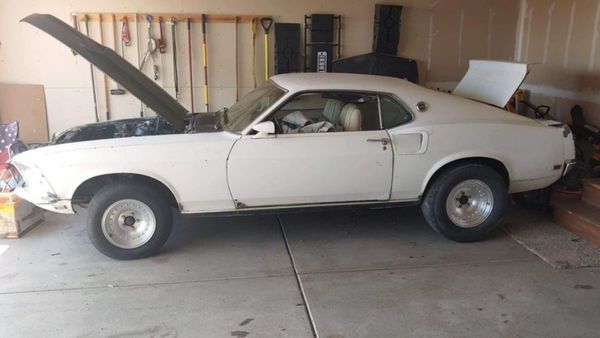 What a rare pony!

You can find some real gems on Facebook if you look hard enough. Case in point: this ultra-rare and historically super significant 1969 Ford Mustang Boss 429 Prototype. It’s any Mustang collector’s dream come true with plenty of interesting details and a fascinating history. Even better, the owner of this prototype is looking to unload it, so you could add it to your garage if you so choose.

This is KK1201, the first of a total of 7 Boss 429 prototypes so the automaker could test out design ideas ahead of production. The seller of this car claims only this prototype is accounted for today. With that claim to rarity, you know the price tag is going to be on the steep end of things.

Featured on this Boss 429 Mustang prototype are rolled fenders and quarter panels. This modification was done by Kar Kraft to test out the 15x7 wheels, so additional room had to be made. It also still has the original block and transmission, plus the shaker assembly and prototype hood. Unfortunately, the seller says the pony suffers from a dropped valve, thanks to a previous owner wrecking it while drag racing. Taking this one-of-a-kind Mustang to the track is a seriously risky move, but fortunately nothing worse happened.

On the invoice of this car, which we’re assuming will be included with the sale, is a note that it went immediately to the Dearborn Test Track right after the build process was complete.

Adding further to the significance of this Boss 429 Prototype is the fact it played a part in the creation of “Ohio” George Montgomery’s 1969 Gasser. It was used to create the fiberglass mold for that car, called Mr. Gasket.

The seller has a document created by Ford Boss 429 expert Ed Meyer which details his findings from inspecting KK1201. Apparently, he discovered quite a few prototype parts which weren’t used for the production 429s. That adds considerably to the curious nature of this car since it has details you apparently won’t find on another. The seller also says he had Kevin Marti research this car and verify it’s the first four-speed CJ shaker car ever made, which is another detail that could make collectors very excited.

Another fun detail the seller has disclosed in his listing is that the door tag is still attached, although aftermarket screws hold it in place now. He believes that’s from a repaint in the mid-80s. What’s curious about the tag is there’s no note of the driveline components or color of the car.

With all that documentation, historical significance, and the rare nature of this 1969 Ford Mustang Boss 429 Prototype, the asking price has been set at $125,000. You can see the Facebook post here. Something tells us the owner isn’t willing to entertain lowball offers. Do you think it’s worth it?