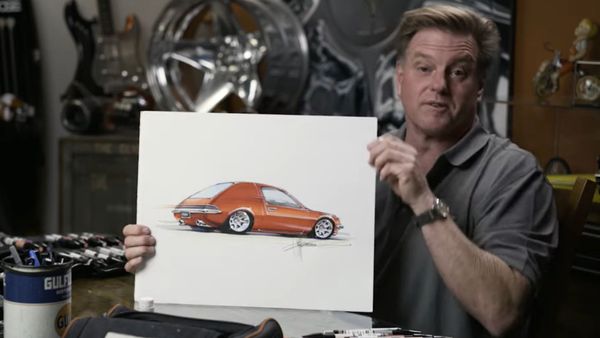 Chip Foose has made a name for himself not only customizing cool cars, but also doing all kinds of classic car redesign renderings by hand. In an age where Photoshop and other digital instruments reign supreme, Foose is decidedly old school. He also likes to focus on classic models, with few exceptions. Rather than give them a few little nips and tucks, will often dramatically shift how they look on paper. That’s exactly what he’s done yet again, this time with the AMC Pacer.

Now, some people find the Pacer to be endearing, maybe even a little sporty. Even the press at the time thought the little AMC was “futuristic.” To those individuals we say turn away now because things are about to get dramatic. Other people snicker at the thought of anyone getting emotional about the little AMC because they consider it to be about as ugly as the Gremlin. These are really divisive issues.

Foose has basically stepped into the O.K. Corral guns blazing, because he completely transforms the very nature of the AMC Pacer. Originally an attempt at making the compact car hip and cool during a time of soaring oil prices, as stated above it’s been a polarizing vehicle.

What Foose does is morph the Pacer into a delivery van. The question which immediately will come to mind of anyone sane is why? You should also be wondering why Foose is mucking with a Pacer in the first place.

The answer to the second question is that Foose himself seems to be mystified that he’s actually doing this. Maybe it has something to do with the coronavirus quarantine? As for the first question, he feels that there’s just too much glass on the Pacer, so turning it into a panel van eliminates that design liability.

When you see the end product of Foose’s sketching, you might think it doesn’t really look like a panel truck. That’s ok, because other than changing the rear fascia some and deleting the rear side windows, he didn’t do much to the Pacer. Really, this is one of Foose's tamest redesigns yet.

But the real question is do you like his work on the Pacer? Or do you think Foose swung for the fences but missed on this one? Leave a comment below and let us know.

More Foose For You