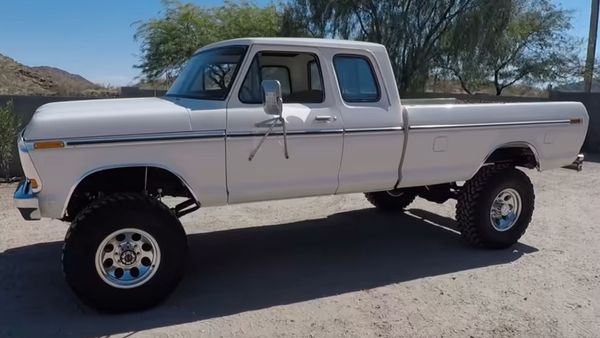 Some people just don’t get what’s so special about a big, old truck. We could spend all day trying to explain it to them and not get anywhere, because what it comes down to is either such a monster is your kind of thing or it isn’t. Just like with muscle cars and other classic vehicles, come people decide they like driving an old pickup that’s been given a nice restomod treatment.

That’s exactly what the video included with this article is all about. We get to see the entire process for this 1979 Ford F-350 from start to finish. What’s even better is the video clocks in at under 15 minutes, thanks to it being sped up and all the boring parts of the process cut out.

One of the biggest updates to this truck is a new engine. The original 400ci V8 wasn’t in good condition wasn’t they tore into it in the video, so the decision was made to go with a 460ci V8 generously donated by a 1996 Ford F-350. We think it’s a wise choice since it not only puts more power on tap but should be a reliable engine (once it’s rebuilt, that is). The guy still saved the original engine and maybe one day he’ll tear into it, fix everything wrong, and throw it in something else. Waste not, want not!

Quite a few aftermarket parts go onto this Ford, from headers to the carb, HVAC, suspension, and more. This is, after all, a restomod and not a period-correct restoration.

As for the body, the paint actually isn’t in too bad of shape, so he just does paint correction. We doubt it’s original, but you never know. There isn’t too much rust, either, but the guy has to get creative when it comes to removing a particular dent. Would you have done it differently?

He also unbolts the cab and bed from the frame, takes off both axles, refinishes the chassis, removes all the body trim to clean up, and pays attention to other small details. As they say, the devil is in the details, so focusing on them is key to an exceptional build.

The video’s definitely cool to watch, and it’s better than the garbage on TV these days, so check it out.