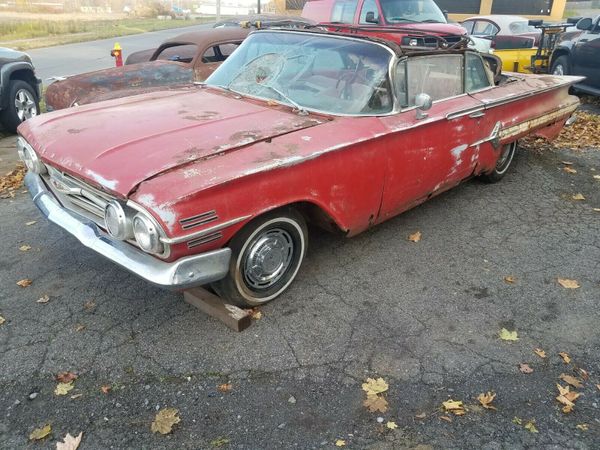 This was one seriously cool Impala when it was new, but is it too far gone to save?

Many car enthusiasts dream of stumbling upon a barn find. However, barns make terrible places to store cars. In many cases, the cars are so deteriorated that they are beyond the point of saving.

That might indeed be the case with this 1960 Chevrolet Impala convertible. The car sold on eBay recently, but we were turned on to it by Auto Evolution.

The rigors of rust certainly had an effect on this poor car. It's been sitting since the early 1970s – according to the ad, it was last registered in 1971. That's almost half a century of decay.

It certainly shows. There's nothing left of the top besides a rusted metal frame, and most of the Impala's body panels show the effects of the dreaded tinworm.

Still, it's a quite desirable car, and it has a desirable powertrain, too. Under the hood, you'll find a 348 cubic inch V8, the little brother to the mighty 409. It's backed up by a four-speed manual transmission.

This must have been a seriously cool car when it was new. It makes us sad to see it in its current state. We wonder if it's too far gone to restore.

Apparently, at least one enthusiast doesn't think so. They bid this rusty Impala all the way to $16,500. That's an awful lot of money for a parts car, so we assume that the buyer has bigger plans.

We do hope to see this car return to its former glory someday. We wish the buyer the best of luck, and if we ever track this car down again, we'll be sure to share it with you here on Motorious.