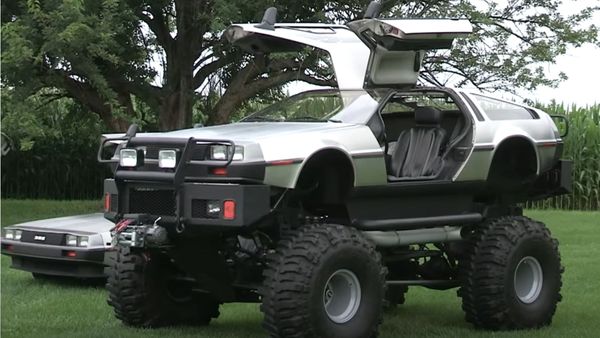 One man has decided to turn a car made popular by Back to the Future into some crazy builds.

Rich Weissensel is a bit of a DeLorean nut. Not only does the guy love the cars and own several, he’s turned many of them into some of the wildest vehicles you could imagine. Among his collection of DeLorean DMC-12s is a monster truck, a stretch limousine, and a hovercraft.

In the video below you get to see these creations in action. Yes, they’re not just movie set pieces which look like they work, these DeLoreans can actually off-road, hover no top of water, and more. Each one is a functional piece of automotive art, fascinating people of all ages.

Perhaps the most iconic of Weissensel’s creations is a Time Machine Replica. It looks pretty good and would fool pretty much anyone who saw it, which considering all the detailed modifications used on the movie cars is really saying something.

Weissensel is a software engineer – not exactly the kind of guy who’d expect to build all kinds of wild vehicles. But he’s been reworking the stainless steel bodies for the past 14 years and has become quite good at it. It all started when he met John DeLorean himself at a car show. Weissensel had some sketches for DeLorean builds he showed the man who liked them. The rest is history.

Of course, not everyone is a fan of what Weissensel does. Some are purists who think cars should be maintained in their original state. While that’s a perfectly respectable stance to take, it’s also unimaginative and not much fun. Constantly tuning and tinkering with cars is a legitimate way to express your appreciation for a certain model. But, as they say, to each his own.

Those naysayers should know Weissensel has a code of conduct. The man only tinkers with DeLoreans that have been wrecked. So he’s not cutting into one that’s still in pristine or even ok condition, leaving those to the people with less imagination.

Read Up On DeLoreans