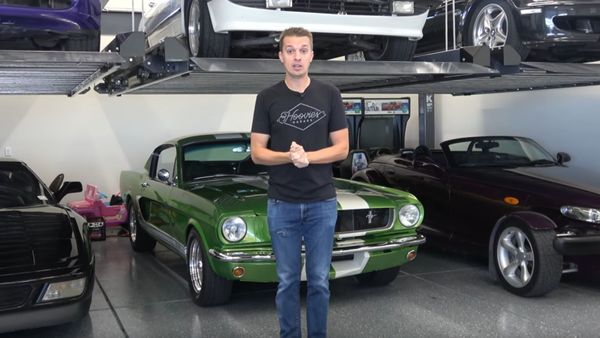 We’ve covered quite a few celebrity car collections on Motorious, from famous people like Justin Bieber and Kanye West who like to really flaunt what they’ve got, to celebrities like Pierce Brosnan who are more low-key. However, we don’t think we’ve ever covered a celebrity car collection the owner himself calls the “dumbest” in the entire world. That’s the kind of self-deprivation YouTube viewers have come to expect from Tyler Hoover of Hoovies Garage, so it’s fitting.

Yes, like Jay Leno and others, Tyler Hoover is a car hoarder. At least his collection isn’t rotting outside or neglected in a warehouse, collecting dust, but the man has 25 cars, or at least he did when this video tour was done (he might have 30 now). Basically, he could almost drive a different car for every day of the month, which when you think about it is pretty crazy.

Should one man own so many cars? Can you possibly enjoy dozens at once? And is Tyler Hoover’s car collection really that awful? All of these questions can be answered in so many ways, because it’s all subjective. Back in the day it was considered crazy for a family to have 2 cars, then later it was excessive to own 3. Today, we don’t know if there is a social standard for how many vehicles a family should own because we associate with other gearheads, many of whom are car hoarders as well.

In our opinion, Hoover has some pretty cool cars in his collection. We actually think it’s kind of smart to snatch up vehicles people consider stinkers and enjoy them, because not everyone can afford to own a 1971 Plymouth ‘Cuda.

Anyway, check out the tour and let us know what you think.