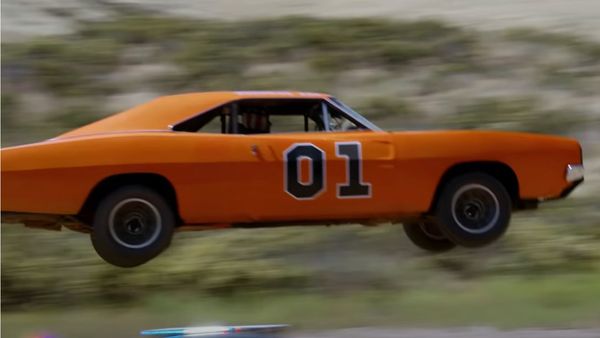 If you look closely, this car is missing an obvious detail…

Throughout the 7-season run, The Dukes of Hazzard captured the minds and hearts of countless Americans as well as quite a few people around the globe. And while part of the attraction was the good-natured fun of the good old boys and their cousin Daisy, what really mesmerized so many was the General Lee. Played by countless 1969 Dodge Chargers, the hero car performed all kinds of bone-crushing stunts for the camera. To recreate that magical, Jay Leno recently used his show, Jay Leno’s Garage, to create a spectacle by jumping a replica General Lee.

In case you don’t know, while Jay Leno is a huge gearhead he’s not an expert in everything having to do with cars. That’s especially the case when it comes to performing dangerous stunts like jumping one, which is why he had Jack Gill, a stunt coordinator and one of the former Dukes of Hazzard stuntmen, on the show to do the jump.

For those whose eyes are keen to detail, you’ll notice this car is missing something. Actually, it’s missing quite a few elements, one of the most obvious being the Confederate flag on the roof. It looks like it might have been edited out, because the glare from the sunlight on the roof seems a bit odd in some of the shots, but we can’t be sure about that.

However, there are a few other interesting items missing. First off, this car has no windshield wipers attached. That’s not a necessary detail to perform this stunt and maybe there’s a good reason for that (they could damage the windshield?). Also, the R/T badge on the front grille is missing. Yeah, we’re being nit-picky but we notice the little things on cars.

Actually, there’s a lot more wrong with this Charger than just that. The secret is while you see a ’69 Charger, what’ underneath is a Ford Crown Victoria. That means it’s not nearly as powerful and the interior looks questionable. With how much the real classic muscle car is worth these days, you can understand why jumping one would be out of the question.