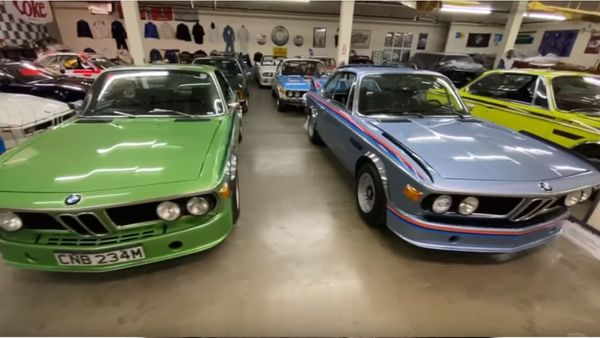 So much German eye candy all in one location, it’s enough to drive one crazy.

If you’re big into BMWs you might already be familiar with Peter Gleeson, a collector living in Seattle. The man has gathered together many rare Bimmers, including some one-of-a-kind models. In the video accompanying this article, you get a nice tour of Gleeson’s collection, thank to the Petersen Automotive Museum. It’s part of an effort to help car fans virtually visit attractions while they’re cooped up thanks to the coronavirus lockdowns.

Gleeson has pretty much everything you can imagine, from an open-wheel racer (it’s a Lotus) to the most legendary BMW road cars. He has a few non-BMWs thrown in here and there. Virtually everything is in fantastic condition, showing the man cares greatly for each vehicle.

One of the highlights of Gleeson’s collection is the array of BMW 3.0 CSLs he has proudly displayed. A homologation special BMW built for the European Touring Car Championship, under 1,300 of the cars were made. Many of these cars came from the factory with extensive lightweighting, although a road car package added more comforts for people not interested in racing. Gleeson has one track-oriented 3.0 CSL in a blue which might have never been applied to another one of its kind.

Easily the most famous car in the collection is the Frank Stella BMW M1 Art Car. Even people who don’t like cars know about it, because it was hand painted by the artist, which attracted considerable attention when it debuted since it actually wasn’t officially commissioned by BMW, unlike the other storied Art Cars from the past. That extra little bit of controversy, if that’s what you want to call it, ensured the vehicle got more attention and is now a type of modern legend.

Admittedly, when compared to some other vehicle collections, Gleeson’s isn’t huge. However, it’s packed with super-interesting cars, especially for anyone who’s a BMW fan. In other words, it makes up in quality what the collection lacks in quantity. The video is just shy of 21 minutes long, but a person could easily get lost in the garage for a few hours while gawking at all the impressive cars.