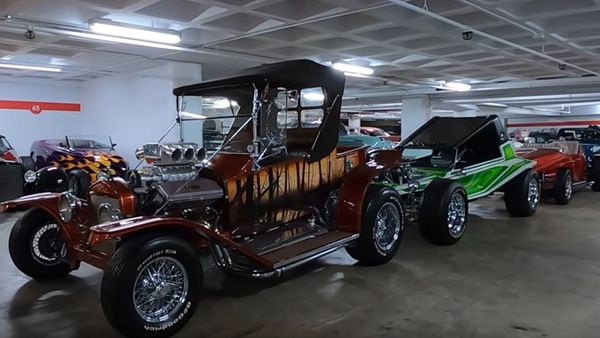 At least we’re getting some virtual free access to some cool places during the pandemic.

If you haven’t visited the Petersen Automotive Museum in Los Angeles you’re really missing out. Formerly a department store, the space has been transformed into one of the most impressive car museums in the United States. An even better treat is to visit the Vault, or the underground parking where numerous cars are stored when they’re not out in the main displays. The video below takes us through one particular area of the Vault where hot rods and customs are kept, giving you a taste for what’s there.

As anyone would expect, the selection of hot rods in the Vault is impressive and also pretty diverse. Whoever has been assembling the collection has quite the eye for interesting rides. For example, there’s a Mathon V16 build, which combines two Chevrolet 350 Small Block V8s. With all that power the hot rod is pretty ridiculous, especially the super wide rear tires. T

he museum also owns a few different cars which have won the America’s Most Beautiful Roadster (AMBR) trophy at the Oakland Roadster Show, which switched names to the Grand National Roadster Show and is held in Pomona each January. Other award-winning hot rods are stored in the Vault, including one which has captured the AMBR trophy twice, something that doesn’t really happen.

Among the customs are quite the variety of cars, from a Karmen body on a Cadillac chassis to a Chevrolet El Camino owned by one of the original Hot Wheels designers. Several low riders are also in attendance, representing the influential movement in car culture.

You can watch the whole tour yourself and gawk at the beautiful cars. It sure beats sitting at home watching reality TV or something else completely worthless.

The Petersen Automotive Museum is also offering virtual tours of the Vault during this COVID-19 pandemic shutdown. Not only do you get to see the many impressive cars squirreled away, your price of admission (which is far lower than the in-person rate) goes toward keeping this museum operational.