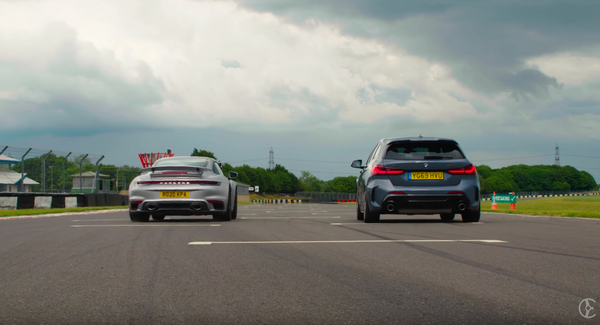 Is this another David vs Goliath matchup?

Pitting a Porsche 911, no matter the model, against a McLaren 600LT just doesn’t seem fair in any way. Yet Carfection did just that for a drag race recently. At least they used a 992 Turbo S for the matchup, but it still makes for a David vs Goliath showdown at the track. Or so you would think, but all is not what it might seem at first.

But not everything is about raw power. The McLaren tips the scale at 2,989 lbs., besting the porkier Porsche which comes in at 3,636 lbs. That means the power-to-weight ratio favors the 600LT. By now you’re thinking the British supercar has the edge after all.

There are more key differences which could determine the outcome of this race. Porsche uses all-wheel drive for the 911 Turbo S. McLaren, on the other hand, have made the 600LT a purely rear-wheel-drive vehicle. However, the British supercar wears special Pirellis P Zero Trofeo R tires which are stickier than what you get on the Porsche. Is your head spinning yet?

Carfection concludes before running this race that the German and British cars should surprisingly be evenly matched. That would mean a photo finish, making it a real nail biter if you had placed bets beforehand. Check out the race before you read any more.

Amazingly, the McLaren 600LT doesn’t even stand a chance. The all-wheel-drive system on the Porsche combined with the rear-engine configuration make for a quicker launch. And while the McLaren does gain a little bit of ground towards the end, it just can’t close that commanding gap.