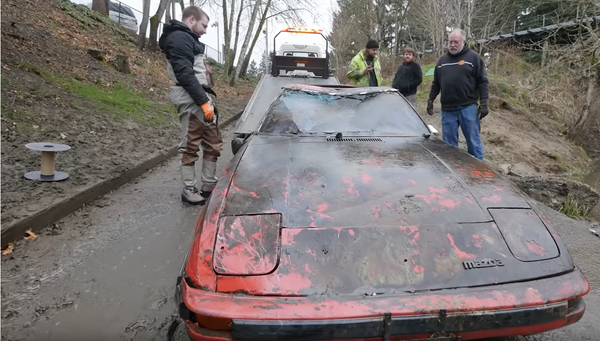 After some detailing and a little Bondo they should be looking great!

Thanks to a rumor of a woman who dumped her boyfriend’s truck in a river, a scuba team dove into the murky water of a river in Oregon to see if they could find it. Little did they know that day they’d be finding not one but six cars out of the depths. Some of these are serious classics, like a Mazda RX-7 FB, a 1973 Ford Mustang Mach 1 Fastback, and more. This is way better than most barn finds.

The most hilarious thing about this video is it really highlights how little most people know about cars. They have trouble figuring out what the different vehicles are until they’re pulled out of the water, except when the diver can find actual nameplates. If they’d sent a car guy he might not have been able to work the scuba gear correctly, but he would’ve nailed each vehicle’s identity within a few minutes.

Once out of the river, the FB Mazda RX-7 looks pretty rough, It was upside down and the roof is damaged, along with the windshield. The guys doubt it’s restorable, but it might be for someone with some serious resources.

After locating the Mazda and Ford Mustang Mach 1, the diver runs into a Chevrolet Luv pickup truck. For sitting underwater for who knows how long, it doesn’t look half bad. Maybe this is the alleged cheater’s truck?

Next to the Chevy Luv is another pickup the diver can’t identify while it’s underwater. Likely it’s a Chevy, but the video isn’t very clear, so good luck figuring it out. If you do, leave a comment below and let the debate begin.

Then the diver finds another Chevy truck, but he realizes the top of it is missing. Again, the murky water makes telling exactly what the guy’s talking about difficult to understand, but likely he’s referring to the cab’s roof.

Sadly, the video only shows the Mazda getting pulled out, so maybe the others are still stuck in the river? This is from the Portland, Oregon area if you’re interested in trying to snag them yourself.