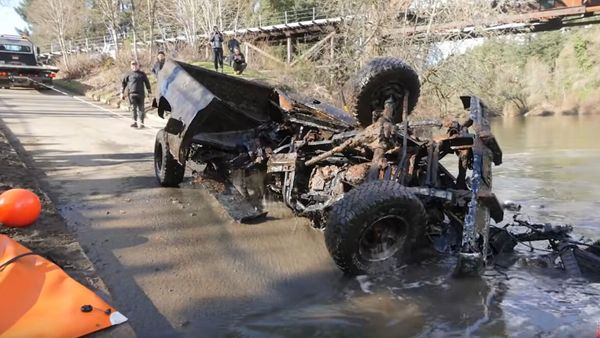 The recovery went a wee bit sideways, plus there are more vehicles still underwater, including a classic muscle car.

We’ve already brought you stories about a Mazda RX-7 and 1973 Ford Mustang Mach 1 being pulled from the Tualatin River, southwest of Portland, Oregon. Now the same dive team is back to pull out another vehicle, a Chevrolet Silverado, which is upside down. Even better, there are still several cars left in the water.

Unlike the RX-7 and Mach 1, this Chevy truck doesn’t come out of the water in one piece. Instead, the rusted frame and body twist and come apart from the extreme forces placed on them during the complex extraction process. What comes up onto the boat ramp looks like a twisted mess obviously suited for scrap metal recycling and not much else. But at least yet another vehicle is out of the river.

This vehicle dumping spot was located by the Adventures with Purpose team after a guy claiming to be a getaway driver contacted the YouTube channel. He said 20 years ago he helped dump some cars by the boat ramp. It looks like he wasn’t the only one, because there are still five down there.

Among the discarded vehicles in the underwater graveyard is a Chevrolet LUV pickup, a Datsun pickup (no word on the model), a Ford pickup (again, not sure what model), a Mazda sedan, and what appears to the divers to be a Chevelle (not sure what year). The potential of a classic, highly sought-after American muscle car was submerged int the river long ago makes this process that much more interesting.

The big question is why all these vehicles have been dumped in the river? If the tipster was telling the truth, at least some were used in crimes, maybe armed robberies, but we don’t know that for sure. Others could have been stolen or ditched to commit insurance fraud. There are several possibilities, but what do you think? Leave a comment below.

Read The Rest Of The Story