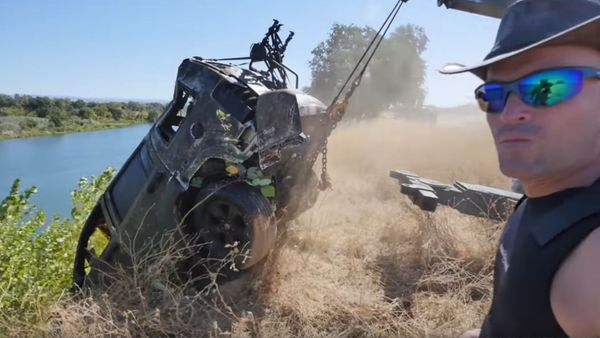 A few other SUVs were found in the water along with it, but the question is why.

Water and cars, two things that really shouldn’t mix, at least in large quantities. Humans seem to be fascinated every time a group of cars is found submersed in a river, lake, or other body of water. After all, everyone knows you shouldn’t drive your vehicle into anything like that. As you can see in the video below, oftentimes these underwater stashes of cars are anything but an accident.

As a dive team and towing company pull this Jeep out of a river in California, they talk about why it, some Cadillac Escalades, and possibly other SUVs are all sunk in the same general area. One of the obvious answers is they were stolen and dumped there. We might think car thieves are always looking to chop up or sell vehicles whole, but they’re also used in crimes like bank robberies, making it harder for police to track the criminals afterward. Dumping cars in water throws authorities off the scent and helps destroy some evidence.

There’s another possible reason for this phenomenon of sinking cars in deep water: insurance fraud. Someone gets in over their head financially, so the way they see out is to dump their car in a river and claim it was stolen, then have the insurance eliminate that burdensome monthly payment. Needless to say, doing this is illegal and not advisable, plus it’s pretty scummy.

Since this Jeep Liberty has essentially new tires, a bike rack, and other goodies, it makes the mystery of what it’s doing in the river a little more interesting. It also fuels the way-to-take-care-of-financial-woes theory, but we just don’t know for sure what happened. Also, the dive team did find the keys in the ignition, something they say is common, meaning the Jeep wasn’t hotwired.

Thankfully, there are no dead bodies in this Jeep. That would change everything instantly, because murder would be a strong possibility and the police would have to investigate the crime scene.