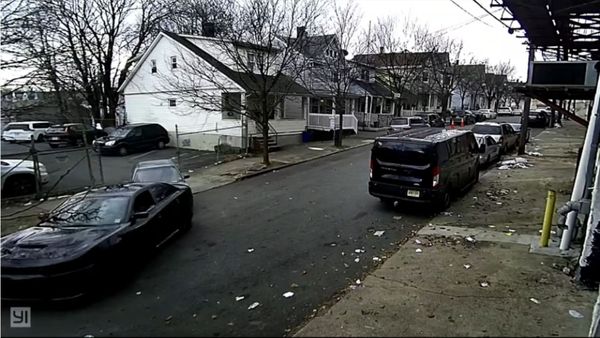 You’ve got to see how far they pushed this thing and the cops didn’t even notice!

Dodge Hellcats are red hot right now, and we’re not talking about just with people buying them like crazy. Thieves want these cars since the parts sell for top dollar on the black market. As you’ll see in the video included with this article, they can take a Mopar in little time, even with all the fancy security technologies.

Two guys pull up to a Dodge Hellcat parked outside in the middle of the day, although we’re not sure where this is. The owner was at work but cameras on a nearby building catching the whole thing. One guy gets out, breaks the driver’s side window and pulls it out, then climbs inside. That right there signals these two aren’t advanced car thieves, but that doesn’t stop them from getting the car in neutral, pushing it out of the parking lot, and then using the other car to push it down the street, probably trying to jump start it. They do this all the way through the nearby intersection.

After they make it through the intersection, as you can see when the video switches camera feeds, it’s clear the Hellcat still isn’t started. The other car is literally pushing it up a hill and struggling since the Mopar is far heavier. What’s even crazier is a cop passes by at the bottom of the hill but fails to notice what’s going on. Let this be a lesson to any police reading this, if you see a car or people pushing a newer Dodge muscle car down the street, it’s a good idea to stop them and ask to see the registration. Chances are it’s being stolen.

After the cop safely passes, both cars reverse down the hill and into the intersection, which looks super suspicious. Then they push it off in the direction the cop came from and that’s it, the Hellcat is gone.

Advice from the owner is to put a tracking system in your Hellcat, whether it’s the Uconnect service or some aftermarket device. That certainly helps, but savvy thieves (and these guys don’t look savvy at all) often have a signal blocker activated to keep GPS trackers from working. Other devices like a kill switch might be even more effective, although these guys obviously weren’t deterred just because they couldn’t get the muscle car started.

The owner also has a GoFundMe campaign with a goal of $3,000, but we suggest checking out any solicitation for money thoroughly before making any donations. In the description, he says his kids car seats and his laptop were in the Hellcat, which sucks. Sadly, this is a lesson in not leaving valuables like laptops in your car and not parking a car like a Hellcat outdoors for any extended period of time. These Mopars are hot and thieves want them, so beware.