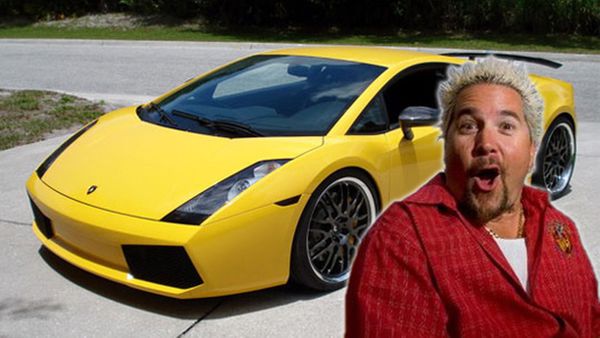 The teen roof-rappelled his way to life behind bars.

Most people are familiar with Guy Fieri - the 'Mayor of Flavortown' - as he is a celebrity host of the popular show Diners, Drive-ins, and Dives on the Food Network. While he can cook up some proper food, Fieri tends to focus more on weird concoctions in the kitchen. While he has a different approach from other celebrity chefs, he is successful with a host of restaurants under his ownership. Let's go back to the time when Guy Fieri's Lamborghini Gallardo was stolen by a 16-year-old kid.

Guy Fieri is a car enthusiast and owns an extensive car collection. According to Drive Tribe, Fieri is a big fan of American muscle cars as he owns a 1968 Pontiac Firebird and 1967 Chevy Camaro that sit among his collection. Mostly because of his celebrity chef status and partly due to the success of his restaurants, Fieri can afford plenty of fine machinery with a net worth about $8.5 million. One of those cars that belonged to his collection Lamborghini Gallardo that has been through the wringer.

Back in 2011, Fieri was filming an episode of 'Triple D' in Chicago when the unthinkable happened. At the time, his bright yellow 2008 Lamborghini Gallardo was getting service work done at a San Francisco dealership. Worth $200,000, the exotic was a bullseye for theft, and the lone thief was just 16 years of age.

The teen, Max Wade, actually rappelled down the building to Fieri's Lambo. Once at the car, Wade cracked the window where he disarmed the alarm, and just proceeded to drive the car off the dealership lot. Of course, everything was captured on surveillance camera, but the police weren't able to catch Wade for an entire year despite witnesses seeing the bright yellow exotic driving over the infamous Golden Gate Bridge.

In ballsy moves by Wade, the stolen Lambo was often spotted out on joyrides by Fieri's friends who would call the chef, who would dismiss reports. Bizarrely, Wade was never caught on these joyrides despite driving a bold exotic that stuck out like a sore thumb. Eventually, the car was found in Wade's storage locker. Fieri was informed about Wade's joyrides in the car where Fieri said "Brave kid", according to Eater.

Fast forward to 2013, and Fieri took the stand in court to testify against the teen. The stolen Lambo was the spotlight in the case against Wade, but wasn't the only crime on the radar. Concluding the trial, the verdict was life in prison due to attempted murder of acquaintances.

What happened to Fieri's Lambo? According to the source, once the trial ended the car was reportedly confiscated by Fieri's insurance company. Outside of the courtroom, Fieri told reporters that “There are other facets to [this case] that are far more important than my car.” This chapter has closed now, and Fieri continues to do what he does best on the Food Network while Wade spends time behind bars.