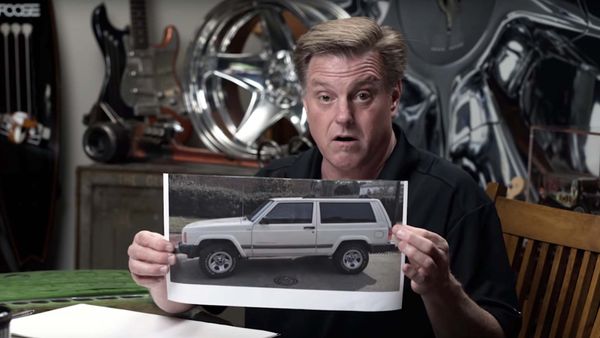 This iconic off-roader helped change the SUV landscape, but what changes would Foose make?

After watching Chip Foose tinker with the design of everything from classic vehicles like the Jaguar XKE and first-gen Ford Bronco to late-model vehicles like the C5 Corvette and E30 BMW M3, it's obvious there aren't many vehicles that he doesn't have an opinion on. With that in mind, we winced when his latest video focused on the Jeep Cherokee XJ.

Like his videos on the '70 Chevelle and '32 Ford, this video is actually more of a love letter to the XJ Cherokee's design that he calls "simple elegance." For this video, he used the softer lines of the second-generation Cherokee (1997-2001) with the sportier proportions of the hard-to-find two-door body style.

So what styling changes would Foose make to the XJ Cherokee? Whether intentional or not, his drawing shows what the Jeep would look like with a shorter wheelbase (with less space between the door and the rear fender), a shortened rear overhang and a steeper rake to the rear pillar. His main focus on this drawing is to make the same changes that many Cherokee owners already make by adding a lift kit, bumpers, tube steps, big tires and wider Wrangler-style fenders.

Interestingly enough, the altered proportions and jacked-up ride height doesn't look all that bad, and it gives off a strong classic Range Rover vibe. We know a lot of Jeep people who would rock such a Foose XJ!

With such subtle tweaks, it will be interesting to see what Jeep purists think of Foose's take on the legendary XJ, and be sure to let us know your thoughts either in the comments below or on the Motorious Facebook page.