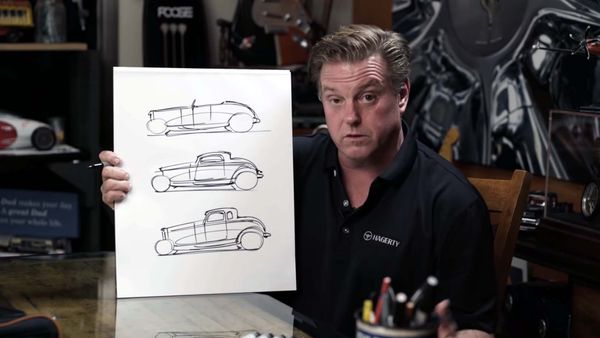 Chip Foose gives a history lesson on the 1932 Ford Model B design.

Chip Foose has definitely been keeping automotive enthusiasts entertained with his series of videos showing him fiddling with the designs of iconic classic cars. From polarizing reworks of the first-gen Ford Bronco and Jaguar E-Type to effective styling tweaks of the '70 Chevelle and C5 Corvette, this video series has been a lesson in both design and automotive history. For his latest video, Foose tackles one of the most customized cars of all time, the 1932 Ford Model B, to show why hotrod lovers and custom car builders flocked to this car.

Before actually drawing a '32 Ford, Foose points out a handful of reasons why this car was so special. For starters, unlike the Model A and Model T, the Model B offered a V8 engine making it instantly popular among racers and customizers. Aside from that, the 1932 was a one-year-only design with 14 different bodies, and the most unique part of these cars is that the exposed frame was actually part of the overall styling. Foose points that no other car has ever done and only performance motorcycles have done since.

The best part of this video is the comparison he gives between the '32 Ford's roadster, three-window and five-window body designs. It's hard to complain about the looks of any '32 Ford hotrod, but Foose favors the five-window due to the door size and just-right body proportions. Despite his preference toward the looks of the five-window body, he draws a couple takes on the roadster including cartoonishly cool picture as well as look at what made Boyd Coddington's Boydster so ground breaking.

As much that has been done to the '32 Ford over the last 88 years, Foose says that there are still ideas and custom designs that are possible for this legendary car.