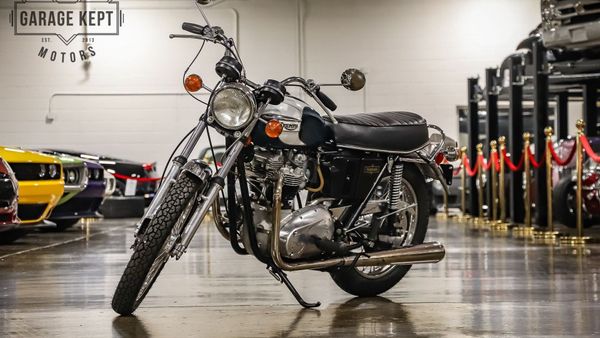 Take a ride on a classic British bike.

Welcome once again to Motorious’ Motorcycle Monday where we pick an interesting motorcycle to highlight. This time around we have a two-wheeled classic from the other side of the pond. Many people have a soft sport for classic Triumphs, including most famously Steve McQueen. In fact, during the filing of The Great Escape Triumphs were used in certain scenes but had to be disguised by the production crew as BMWs.

If the King of Cool loved Triumphs, it’s easy to see why people still swoon over them today. This TR6R 650 is one of the later iterations of the Tiger, a name which Triumph used for some time and riders from back in the day will recall with a certain level of fondness.

This Triumph looks great with a two-tone white and teal tank, gold pinstriping separating the two colors, plus shiny chrome on all the right components from the front fender to the exhaust pipes. Cruising around town on this will certainly get people talking and asking questions, so it could be a big ice breaker.

While certainly not a crotch rocket, the factory 650cc twin with single carb provides some good low-end torque, revving to peak horsepower at 6,500 rpm for some open-road cruising. This is a no-fuss, simple and fun classic motorcycle to help remind you of the simple old days, or if you’re a younger rider to help you gain an appreciation for life back then.

In the photos the odometer shows just under 3,680 miles. That’s unbelievably low, but looking at the condition of everything on this 1972 Triumph Tiger TR6R 650, it’s certainly a possibility. Ultimately, you would have to decide if this is a bike worth grabbing while it’s still around or waiting for something else.

If you want to ask questions or make an offer on this Triumph, it’s being sold by Garage Kept Motors.