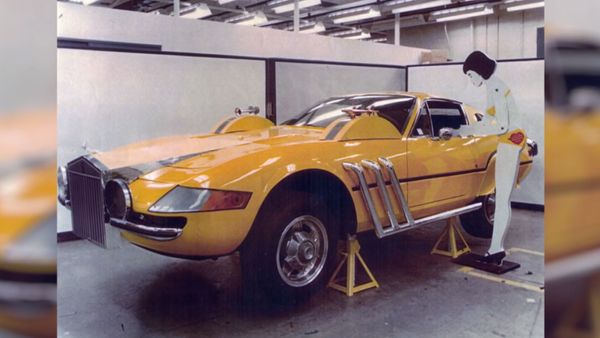 There’s a funny story behind this car.

People have done some really strange things to cars, some of it good and some of it not so good. While you might find some customizations so outrageous they’re offensive, at least you haven’t plunked down good money for such a vehicle. It’s even worse when someone modifies your dream car without your permission, which is exactly what happened to Chuck Jordan, vice president of design at General Motors back in the day.

Jordan had a beloved yellow Ferrari Daytona. While the cars weren’t built for amateur drivers, they are definitely beautiful, something Jordan obviously cared about deeply. However, his staff at GM took exception with him driving something that wasn’t under the General Motors umbrella, regardless of how it was designed. They wanted to see him driving a Corvette, but it’s not entirely clear why Jordan didn’t want to do that.

While on a trip out of the country, Jordan left his beloved Ferrari in the design studio garage in Warren, Michigan. That’s when a dastardly plot was launched to modify the car using foam core, tape, Rolls-Royce grille and headlights, side-exit exhaust headers, exterior horns, a huge rear-mounted spare tire, and more.

Reportedly, the prank didn’t go so well, even though no damage was done to the car. When Jordan returned, he had the head of design from Volvo with him and wanted to show off his Ferrari, so it was a bit of an embarrassment.

This story was recounted by Bill Warner, who also owns a yellow Ferrari Daytona. Warner is the Founder and Chairman of the Amelia Island Concours d’Elegance Foundation, so the man knows cars. When he finally made a big score selling a car, he decided to get a Ferrari, something he always felt was out of reach. As you can hear about in the video, he learned the cars are actually kind of nightmarish to own, even though they’re beautiful. It’s quite the story.