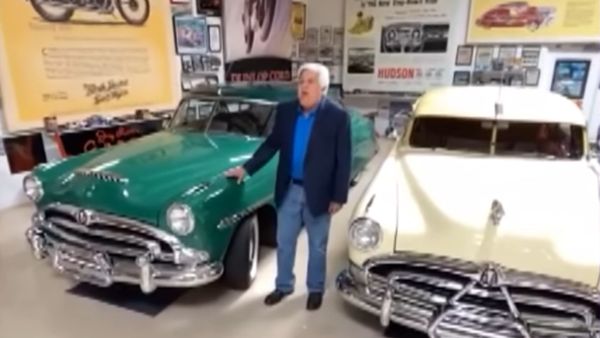 It’s not just about collectability for Leno, but also the story behind the car.

Thanks to the Pixar movie Cars, even non-gearheads know about the Hudson Hornet, although they might think it was a little different than the classic car. For those who understand the history of motorsports, they know the Hornet was a dominant stock racer in its day, thanks to that famous Twin H-Power that made it “Fabulous.” Even by today’s standards, the car is pretty impressive, demonstrating what a marvel it was in post-war America.

Of course, that historical significance is important to car collectors, including Jay Leno. All of the cars in his massive collection score high in that respect, but he already had one Hudson Hornet when he was approached by an old woman about buying a second one.

Lenoturns plenty of people down when they try to sell a car to him, in part because he gets pitched cars all the time. For him to say yes to a car means there’s something especially compelling about it. In this case, Leno initially told the woman no because he already had a Hornet.

Instead of giving up, the 94 year-old woman told him it was a “wonderful car” and invited the comedian to just come take a look at it. He obliged and the woman talked him into purchasing the car for $5,000. Two years later he completed the restoration and invited the woman as well as her adult children to ride in it.

That’s when Leno started learning how the family moved to California driving the car on Route 66, then later the kids were embarrassed their parents drove such an old thing and would ask to be dropped off around the corner. We as collectors don’t always get to hear these stories.

All this was told while Leno was recently on the Kelly Clarkson Show. Most gearheads probably don’t watch that, but it was such an interesting story we wanted to call your attention to it.

You’ll never guess what the guy who built this does for a living....

Never underestimate the power of a classic car!...