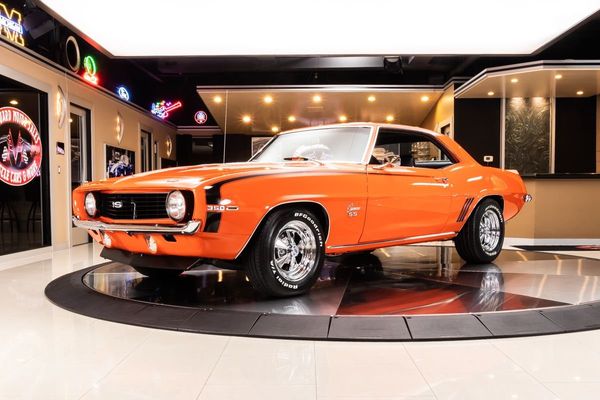 Let's get festive with some of the coolest orange cars on Motorious!

Orange is brilliant color on cars, and we can't help but to get in the mood for Halloween when we see them. Check out these festive orange cars.

Chevrolet did many things right for their first-generation Camaros, and it is apparent that they have gained a large following from its timeless appeal since its introduction. And that makes this frame-off restored Tangelo Orange Camaro RS/SS with the powerful 502 Big Block no stranger to turning heads and being ground-thumping happy! Beautiful body lines that retain the iconic classic Chevy look all while being upgraded with modern 18” wheels from US Mags.

This is solid Blazer we got out of the Pacific Northwest. It is Hugger Orange and has the desirable Black Interior with Console. A Removable Top is also optioned on this clean K5. There are 15x8 Truck Rally Wheels with 33-inch tires. While this truck looks very nice in person, it is not a fresh paint job. So it does have a desirable patina to it that many Blazer buyers are looking for.

This incredible McLaren MP4-12C comes finished in an immaculate McLaren orange exterior complemented by a spotless carbon black leather interior. Powering this vehicle is a brilliantly engineered 3.8 liter twin-turbocharged V8 engine mated to a 7-speed dual clutch transmission. Additionally, This incredible package features various Formula 1-sourced technologies such as "brake steer" in addition to being fully loaded with every luxury feature a driver could ask for. This example comes to us from an elite private collection where it was always professionally maintained by the owners private staff.

This 1967 Chevrolet C10 Stepside get the full classic attitude right.  It has a nice vintage looks on the outside, plenty of recent investments for utility, and you get to enjoy this full versatile V8 package from an upgraded interior. The color on this one makes a good first impression.  The fiery orange was an upgrade later in life, and it retains a nice gloss that highlights the extra curves that come on these stepside pickup beds. There are classic pieces like the bright chrome bumpers, and even a classic Thriftmaster badge on the side.  These are joined by nice upgrades like the newer wheels, tinted windows, and polished dual exhaust tips.  But the investments that you're going to like the best are the ones that add to the utility.

This is a fully documented, matching numbers, frame off-rotisserie restored Chevelle SS. The car has its original L-48 350 4-bbl V-8 engine, fully rebuilt, with its original vin stampings intact. Its 3 speed Turbo Hydramatic transmission has been rebuilt as well. The build sheet lists G80 posi traction, for the 12 bolt rear with a 2.73 axle ratio. This car was restored by a highly rated shop and has super straight panels with great body lines. The colors are Orange Flame over a Black interior with a Black convertible top. Its interior has bucket seats with a factory console, Sport steering wheel, U14 instrument panel gauges, etc. This car has had 2 owners during its lifetime, both in the same family and the restoration was commissioned by them with the intention of keeping the car.

This 1970 Dodge Challenger T/A 340 Six Pack 4-speed was rotisserie restored in 2015, with only shake down miles on the restoration. It is 100% Numbers Matching Drivetrain and Body VIN's.  The restoration was completed to original Broadcast Sheet.   It is well equipped, with buck seats, console, and pistol-grip four speed.

1969 Dodge Super Bee “M” Code 440-6 Why This Car Is Special One of the fastest muscle cars ever made was the 1969 Dodge Super Bee A12 with the “M” code 440 cubic inch engine sporting three performance carbs and featuring a lift-off fiberglass hood, and we have a stunning one here for sale at Skyway Classics. The origin of the name, "Super Bee" started out as a "B" Body designation of Chrysler's mid-sized cars, including the Road Runner and Charger. Plymouth's Road Runner sales were enough to have Dodge Division General Manager, Robert McCurry, request a similar model from the Dodge Styling office.

The groundbreaking 2019 ZR1 is the fastest, most powerful production Corvette ever built with a 755-horsepower LT5 new generation supercharged V8 engine. 1 of only 644 Sebring Orange C7 ZR1 Coupes ever! This is a no compromise 212 miles per hour car.

Check out this awesome Backdraft Racing 1965 Shelby Cobra. This Cobra is sure to turn heads wherever you go thanks to the glossy Orange paint finish, painted black racing stripes, removable fastback hardtop, removable front spoiler, black leather interior, 18-inch black knock-off style wheels, hood scoop, side pipes, decal competition numbers, along with blacked-out components all around. This roadster even has fully-functional Front Brake Cooling Ducts installed! All of these amazing details were completely built and tested at the factory by Backdraft Racing. Under the hood sits a Ford 5.0L Coyote V8 engine with EFI.

This is a nicely restored and upgraded engine 1965 Nova SS.  Born with an inline 6-cylinder engine, now sporting a 350 cubic inch, and in the color maroon, we now see it bedecked with orange and all brite work and chrome has been blackened. In the loose form of a Halloween-esque theme, and with an engine upgrade, we know this little 1965 Nova that is wicked fast.