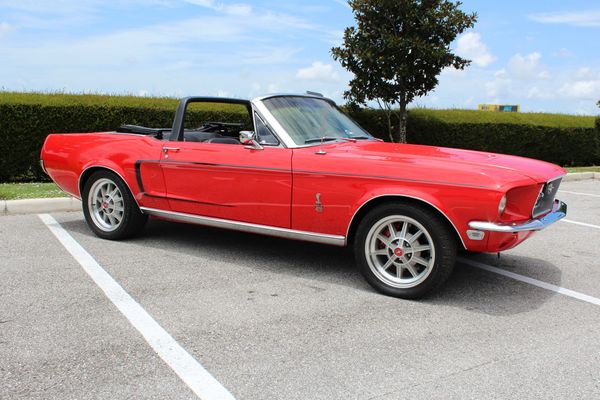 With warmer weather on the way, it's time to get some fresh air in these impressive 'Verts!

Nothing beats cabin fever like getting on the road and cruising around with the sun on your face, and wind blowing in your hair. To celebrate the return of warm weather and sunny days, we have picked our favorite convertibles you can find in our inventory right now.

The GTO is an iconic poncho that ruled in its era. This first year GTO is the thing of Pontiac collector's dreams. It was rotisserie restoration in August 2016, and appears to need nothing except a driver to slide behind the wheel.

This 1967 Pontiac Firebird 400 Convertible is the first year for the legendary nameplate. That's why it's exciting to find an early example 1967 Pontiac Firebird with a low VIN production number. So it's already appealing before you check out the correct-style V8 and nice details of this now-legendary droptop classic. These first-year Firebirds were an instant classic thanks to the bold styling.

This nicely restored, correct color combination mid-year Corvette Convertible gives you a perfect excuse to show off the car's stunning interior. In additon to the correct saddle interior and head turning Goodwood Green exterior, it is powered by a 350-horsepower, 327 cubic inch V8 engine, that's backed by a four-speed manual transmission. Between the peppy engine, manual transmission, and drop top body style, this 1967 Corvette must be a blast to drive!

Aside from being a nice example of a convertible, this 1967 Mustang is one of the sickest cars for sale on the internet. It’s a unique blend of original Shelby Super Snake goodness and modern upgrades, with looks that could kill. The venom of a blown 5.4-liter engine, backed by a T56 six-speed manual, gives this drop top Pony tons of gallop. Upgraded bolt-ons, suspension, and braking give you full control of this monster.

This 1969 Jaguar XKE Convertible has a numbers matching 4.2-liter Inline-6 cylinder engine, which is backed by a numbers matching four-speed manual transmission, It has only 56,145 original miles on the clock, and has had the same owner from 2005-2019.

The 1959 DeSotos continued in the style of famed automotive designer Virgil Exner's “Forward Look,” the celebrated styling trend which Chrysler introduced across the board for their 1956 models... the “look” that made Plymouth, Dodge, DeSoto and Chrysler sales soar as mightily as did the fins of these bespangled automobiles. This Fireflite was rebuilt from the ground up, utilizing a couple of donor cars to complete this car with all steel no rust panels, a solid frame where even the inside was epoxied to prevent rust on the frame. All panels were dipped then meticulously sanded and painted to what you see here as your crescendo in 1959 form.

This 1969 Oldsmobile 442 Convertible has its numbers-matching V8 under the hood. And while that makes it an awesome classic, the upgraded paint package and other subtle additions create the kind of droptop muscle car cruiser you've been dreaming about. The two-tone is an instant attention-grabber. Black and silver are a timeless color combo, and this one uses the style of the car to expertly intertwine the two on this 1969 442.

This 1965 Sunbeam Tiger Convertible recieved a complete nut and bolt restoration in 2016. It has the correct 260 cubic-inch Ford V8 under the hood, a 4-speed manual transmission, and is a convertible soft top that comes with a removable hardtop. The beautiful black vinyle interior is perfect to show off with the top down.

This lemon twist 1970 Plymouth 'Cuda convertible was one of the biggest shot fired by Chrysler in the muscle-car wars, but some say it came late in the game. A beautiful job has been done with this 1970 Cuda, and some interesting options where ordered with this muscle car. At the front of the car, a traditional blackout split grille with single black bezel headlights flanking on either side. At the top of those lamps, a familiar Shaker Hood in Lemon Twist, replaces the original 2 port hood, and now has a corresponding black scoop. Under the hood is a 426 HEMI, which is backed by a Torqueflite A727 automatic transmission.

Only the best of the best components in the 150k invested build. It was rotisserie restored in 2019 with all powder coated chassis, and 4-wheel Baer disc brakes. This build rolls on a tubular suspension power steering. ICE cold factory AC with modern components. This is a stunning pro built no excuses car for the most demanding collector.

Motorious would like to thank the TechForce Foundation for their continued support of the Automotive Technology Career path. The mission of the TechForce Foundation is to support and encourage technical education for the  automotive, diesel, collision repair, motorcycle, marine, NASCAR and other transportation industries through scholarships, grants, career development, and other special programs. Click here to see the exciting  programs that TechForce offers and the people they support