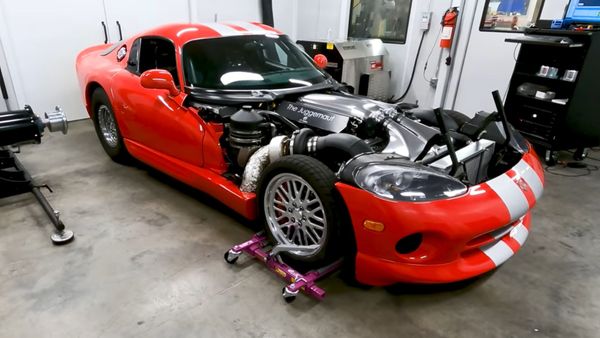 That’s quite the bite for the snake!

While the Dodge Viper is sadly no longer being made, that of course doesn’t mean you can’t be playing and having fun with them. This gen 2 Viper called The Juggernaut has been tuned by Nth Moto to live up to its name. Using a twin-turbo system and other mods, it’s pushing a monstrous 2,000-horsepower. It sounds just as fierce as you’d expect and we’re completely in love.

In the video, we see The Juggernaut with the hood completely off. That means a good amount of the setup is laid bare in some of the best eye candy we’ve beheld recently. While you can’t see the engine internals, which are detailed out by the guy later, you get a nice peek at the custom billet intake and two absolutely massive turbochargers.

Not only does everything under the hood of The Juggernaut look amazing, its performance is incredible. Nth Moto says the best quarter mile time logged with the Viper is a screaming 7.3 seconds at 199 mph with the car running 28 psi of boost. As they say, the proof is in the pudding and that’s definitely the case here.

This Viper is obviously purpose-built for drag racing, which is does extremely well. You’ll note the front tires are skinny while the rear slicks are massive. Those factory fog light openings are open intakes for the turbos. Of course, there’s a roll cage and parachutes. Plus, there’s no air filter, so airflow is maximized. This isn’t a road car by any stretch of the imagination.

If you want to learn more about the finer technical design of this 2000 Dodge Viper, the video gets into a fair amount of it. Plus, you get to hear this drag strip monster fire up and go under load, which is completely worth it. To just hear the car, skip to 14:44 in the video.