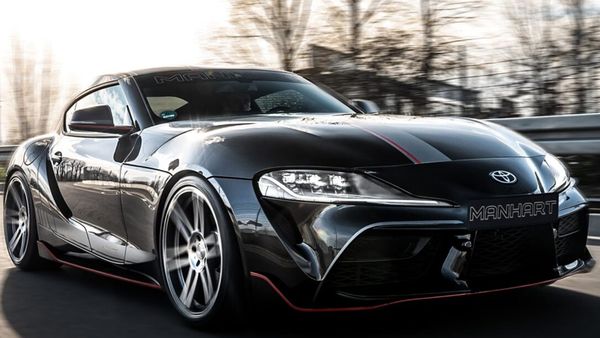 Get more horsepower with your 2020 Toyota Supra now.

Even before the new Toyota Supra came out, people were complaining about its relative lack of power. After all, these days 450 horsepower is the new 300-hp, especially when you have Camry sedans breaking that figure. Granted, the BMW-sourced powertrain rockets the Supra from 0-60 much faster than anyone expected, but everyone wants more power. That’s where German tuning output Manhart comes in with a nice lineup of performance parts.

Manhart has a history of tweaking Bimmers, so dialing up the new Toyota Supra isn’t much of a leap. The result is the Manhart Supra GR 450. As the name implies, the sports car has 450 PS or 444-hp on tap, but that’s certainly not all there is to it.

To get this kind of power boost you’re going to pony up some serious cash. The Manhart ECU remap for a Supra costs $2,700 but some will think that’s a small price. Consider the fact different magazines have been able to clock 0-60 times under 4 seconds – what would an additional 100-plus-hp do?

A bigger issue pointed out by reviewers is the Supra’s sloppy handling. Manhart offers KW coilovers for just shy of $2,000. Not only do these tighten everything up at the four corners, the car is lowered a little bit for improved handling and arguably a better presentation. Other coilover kits and even H&R Sport springs are available at different prices.

Everyone knows with turbocharged cars freeing up the exhale can really help. Manhart has a few different exhaust upgrades, like a downpipe and an axle-back system with valve control. Check out how it sounds in the video below.

Also in the Manhart arsenal are a few electronics from an ECM valve control to an ECM valve delete. A decal set costing about $900 looks cool and some probably believe it adds 30% more horsepower. If you really want to go large, the tuner offers two different types of wheels for the car, which will set you back in the neighborhood of $3,000.

The real question is if any of these Manhart upgrades change your perception of the new Toyota Supra? Would you be more likely to buy one knowing you can slap down even more cash to mod it out?