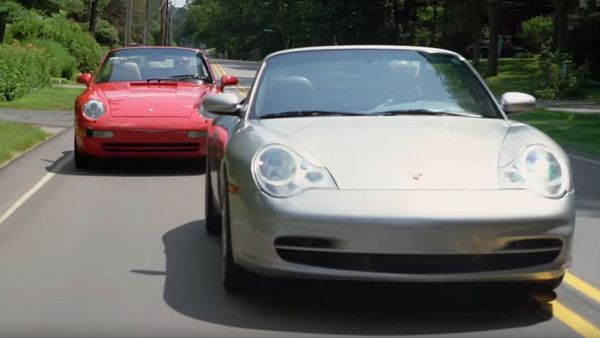 Is it time to put the air-cooled vs water-cooled debate to rest?

Air-cooled vs water-cooled: the question is the litmus test for Porsche 911 fans. You’ve probably been asked this before. If not, it’ll happen sooner or later. Your answer could be as contentious as choosing between Ford and Chevy, the Dallas Cowboys and the New England Patriots, baseball and drag racing, etc. Well, we have someone who will either make everyone angry or happy, depending on how fanatical they are about this topic.

Keith Hamersa just loves Porsche 911s. He proudly declares in the video segment below how he thinks they’re the best-driving vehicles ever made. You can disagree with him, but that’s how the man feels and he’s entitled to that opinion. He’s driven his son’s BMW M3, although it’s not entirely clear what generation it is, and wasn’t impressed. According to him, Porsche puts the engine where it belongs in a car: the rear.

You probably see where this is going: Hamersa owns both a Porsche 993 and a 996. That’s almost unthinkable in some circles, since the 996 supposedly ruined the German grand tourer. At least that’s the doctrine taught in many Porsche circles and blasted in forums, through social media, and more.

Purists contend the only way to really experience the Porsche 911 is to get an air-cooled model. Prices for those have skyrocketed and don’t show any signs of coming down, so for a lot of people, especially younger gearheads, an air-cooled 911 is just out of reach. However, the air-cooled acolytes don’t care because their belief is dogmatic and leaves no room for disagreement.

Thankfully, there are more level-headed and reasonable people out there, like Hamersa. He strikes a nice balance that’s refreshing to hear, considering the extreme opinions are blasted throughout the internet and other places way too often.

Another note about the video is that Hamersa says he didn’t get a Porsche 911 until all the kids were out of the house. For some of us a hobby car like that just isn’t financially feasible before then. Sure, jealous, small-minded people will refer to such vehicles as “midlife crisis mobiles” but we should all just ignore that nonsense.