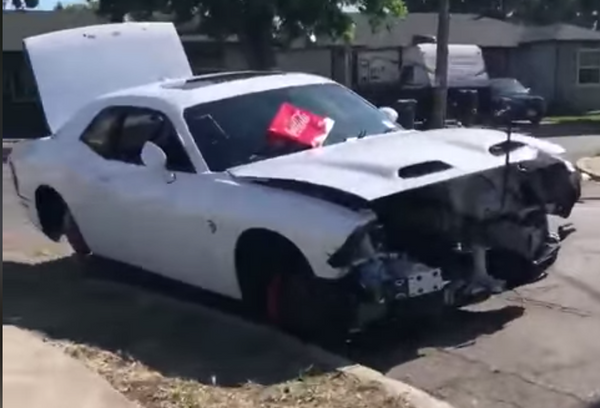 So far, 59 out of 74 of the looted high-performance Mopars were recovered and five arrests have been made.

As you know from our recent story, a Dodge dealership in San Leandro, California, became one of the biggest targets during a night of violent riots and intense looting on June 1st following the recent death of George Floyd after his neck was pinned by the knee of Minneapolis police officer Derek Chauvin during an arrest. It turns out that a total of 74 high-performance vehicles were stolen and driven right off the lot, mainly expensive and powerful SRT Challenger Hellcats. Many of these cars were caught on video roasting rubber and recklessly driving around before leaving the scene. In fact, a grand total of 74 new vehicles were stolen on June 1st, and 59 of those cars have since been recovered. Out of all of those stolen and damaged vehicles, five arrests were made. The monetary value of the cars stolen equaled out to $2.7 million.

As soon as the looters - or shall we call them criminals - made their way over to the dealer, they began smashing out the showroom windows where they were able to make it inside to the the lock box that held the keys to all cars on the lot. After that, it didn't take long for the looters to locate their vehicles of choice including Dodge Challenger SRT Hellcats, Chargers, Challengers, Trackhawks, and more. As mentioned above, before they hightailed it out of sight, they were seen doing burnouts and recklessly driving the stolen vehicles and damaging them heavily. The phrase "Drive It Like You Stole It" definitely played true in this scenario.

Hidalgo, the owner, assessed the vehicles that have now been recovered, plenty in rough shape. Although the cars had tracking devices in the frames, with the amount of vehicles stolen that were constantly on the move, and with police still busy with the riots, it was hard to get the cars recovered quickly.

“We have trackers on them so we’re seeing the ones that out there,” he said. “They are racing around everywhere.”

In a bizarre turn of events, the California Highway Patrol made an attempt to perform a traffic stop on one of the stolen Hellcat Challengers after it was found to be driving recklessly with a license plate that did not match the car. The driver of the stolen Hellcat, Erik Salgado, then attempted to ram the CHP cop cars with the high-performance muscle car. Unfortunately, the situation did not end well for Erik and his pregnant girlfriend, Brianna, who was riding passenger. Sadly, Erik and the unborn child did not make it out of the situation. Brianna was listed as stable.

Our hearts are saddened by the situation all around. To protest is one thing, but to turn said protest into senseless violent rage along with looting and the destruction of property by hard-working businesses, etc., is another thing. There have been deaths that occurred during the rioting that didn't have to happen, some being innocent bystanders.

There's no denying that 2020 is a year for the history books that nobody in this lifetime could forget even if they tried. While we are still dealing with a global pandemic that has been spreading like a wildfire doused with gasoline, protests have turned into violent riots across the country following the recent death of George Floyd after his neck was pinned by the knee of Minneapolis police officer Derek Chauvin during an arrest. Businesses, apartments, police stations, you name it, have been completely destroyed and/or set ablaze in cities everywhere. Adding insult to injury, people have turned to looting and ravaging businesses, even the small local stores that are already trying to stay afloat due to COVID-19 and the plummeting economy. One particular Dodge dealership located in San Leandro, California, was a recent target of such mayhem. Not only was the dealership heavily damaged, but more than 50 of their high-performance vehicles were stolen and driven right off the lot. That includes almost every single one of their Dodge Challenger Hellcats worth $100,000 apiece.

“Right now we’re thinking 50 [vehicles] … Gone," said Carlos Hidalgo, owner of the dealership. "We have trackers on them so we’re seeing which ones are out there. They’re running around everywhere.”

The town of San Leandro, set in between Hayward and Oakland, saw its fair share of the chaos. As mentioned above, their local Dodge dealership suffered a great deal as their showroom windows were smashed out allowing easy access to the keys for the most valuable vehicles on the lot. A large group of looters were able to take off with over 50 performance models and that includes almost every single $100k Dodge Challenger Hellcat in the dealership's inventory.

One of the Hellcats was strategically parked in the driveway as a barricade to block cars, but that didn't stop these looting criminals from ramming it right out of way. Another Hellcat sat on the showroom floor, but it was taken and driven straight out the front window. Other car models taken include wide-body Chargers, Trackhawk SUVs, Challengers, and more.

Video evidence has surfaced on social media that shows the looters breaking windows, snatching keys to their performance machine of choice, and letting 'em rip. More photos and videos were also shared that shows front end damage to one of the white Hellcat Challengers, and we suspect that more have suffered some destruction during the chaos.

Escaping with these expensive Mopars was much easier than one would think considering that this Dodge dealership is located right next to the freeway. An NBC Bay Area news outlet recorded an aerial view via helicopter showing the aftermath of the Dodge destruction.

Even more videos have been posted on Instagram with one individual walking and talking to the drivers, instigating them to show him what the car can do. That's when one unmasked driver in a Hellcat Challenger laid down some rubber in a big smokey burnout while waiting in line with other stolen vehicles to make their grand escape. In yet another video, one of the stolen Hellcat Challengers can be seen drifting around performing burnouts and donuts as his passenger hangs out of the window.

As mentioned above, the thieves didn't just settle for any old base model Dodge vehicle, but instead opted for the expensive high-end Challenger Hellcats, as well as wide-body Chargers and Challengers, and the performance-based TrackHawk SUV that hauls more than just the mail. More than 50 high-performance vehicles were stolen in total.

Hopefully, the dealership is equipped with HD quality surveillance so they can identify the culprits, especially those lacking the common sense to wear masks as they commit a crime that faces some serious consequences. One slice of good news is that all of these cars are equipped with tracking devices. However, due to the fact that so many were stolen and have been constantly on the move, it has made it almost impossible to flag them down. Even more, the riots are still ongoing keeping law enforcement busier than ever, so they are not able to respond to help locate these stolen vehicles at this time.