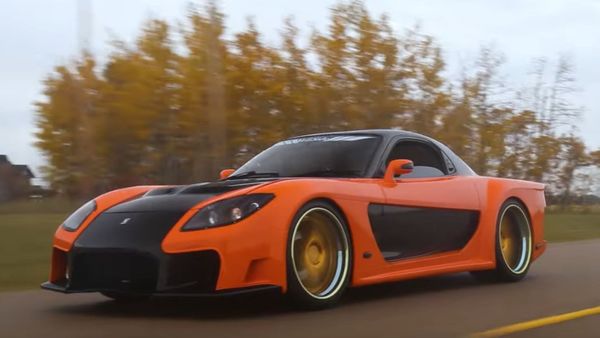 When Fast and Furious: Tokyo Drift came out back in 2006, the blockbuster movie franchise shined a light on the drift culture which originated in Japan. This meant instead of showcasing just one or two actual JDM cars in a movie with a bunch of other US-spec Japanese-brand vehicles, filmmakers were finally able to flash a whole array of genuine JDM rides in their native environment. For a number of car enthusiasts, the movie will forever be iconic, especially Han’s RX-7.

What we have here is a pretty convincing tribute car. The single-turbo FD RX-7 wears a real Veilside widebody kit, not some cheap knockoff, plus the same graphics as Han’s car. And while in the movie the Mazda was mercilessly destroyed, it lives on through builds like this one.

Just like in the movie, this FD has been converted into a single-turbo monster. You can hear that snail spooling up as well as the satisfactory blow-off valve every time the guy shifts, which is becoming a thing of nostalgia these days.

This FD RX-7 made to look like Han’s ride is part of a guy’s Fast and Furious collection housed in the countryside of Edmonton, Alberta of all places. Jorge, the guy who owns all these cars, has many unique builds. Apparently he’s a big fan of the movie franchise.

In his collection right now are 24 replica cars, but he’s not done. Jorge says he’s going to stop when he has 35. Considering the movies are still being made, we kind of doubt he really knows where the cap will be. Apparently, his wife isn’t too amused with this hobby. We can’t imagine why.

Jorge is obviously obsessed. He keeps his cars in a garage with giant posters from the different movies. In his interview he’s wearing a shirt that says, “tuna, no crust.” The guy lives his life a quarter mile at a time.