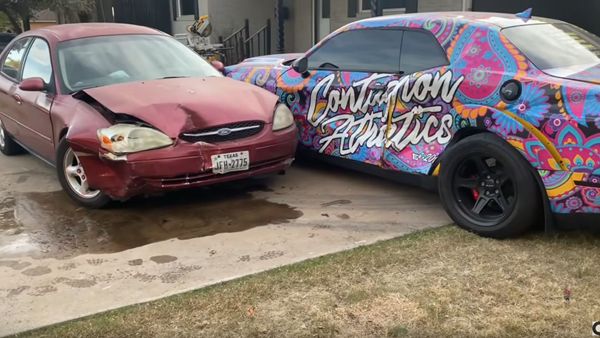 YouTuber Kevin Van Voris is one of the lucky few people to own a Dodge Demon. The man obviously loves the potent muscle car, even if the wrap on it is of questionable taste. But, as an insurance advertising campaign once said, life comes at you fast. In a heartbeat, the Demon was totaled by a driver who allegedly was intoxicated, and we have the video for you to judge for yourself.

While you might keep your beloved car in the garage at night to guard against theft, parking it in the driveway during the daytime seems convenient and like there’s little risk involved. After you see this old Ford Taurus drive off the road, on the driveway, and aim right for the side of the Demon, you’ll probably be thinking twice about not always keep your ride in the garage. Van Voris had his car out of the garage since he was having some work done inside it.

You can hear the guy’s reaction once he sees the damage and realizes his Demon has been totaled. The anguish in his voice is apparent and you can’t help but feel badly for him. He calls it the worst day of his life, but we hope he’s just exaggerating.

Sadly, the kid who hit the Demon apparently tried to take off after the accident. Van Voris says his neighbor had to stop him from fleeing and the police were able to take him into custody. Hopefully that guy gets the help he needs and lives a life of sobriety moving forward.

Van Voris says he started a few businesses “from nothing” and that’s how he afford cool cars like his Demon. While he hopefully can get something else cool if he doesn’t elect to keep the Mopar muscle machine, it probably won’t be another Demon. Prices for these cars have climbed considerably since everyone wants one. We hope there’s a happy ending here.

Check out the video for yourself (warning: language).