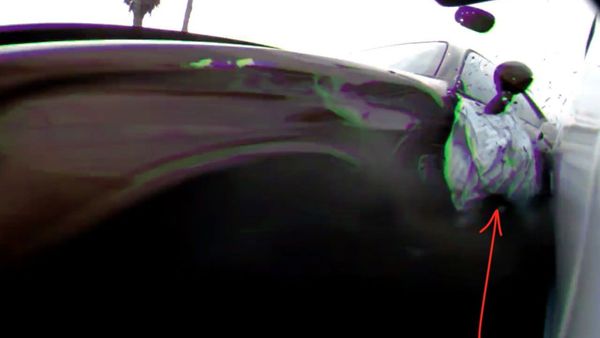 This is why Teslas have such a bad reputation…

Footage from a Tesla that was rear-ended (sort of) by a Dodge Challenger Hellcat was recently posted to Twitter by a user called “green.” A line of cars are moving slowly towards a left turn ahead, meanwhile traffic in the other lanes is moving quickly. While the Tesla is at the back of the line, the passenger-side rear-facing camera catches the Hellcat striking the rear quarter panel and squeezing between the Tesla and the car in the next lane.

Typical human precision at its finest, I guess?

Sometimes you just can't do anything about the upcoming accident it seems.

While the accident could’ve been far worse, this clearly is all on the Hellcat driver. Why they didn’t slow down or get in the next lane is anyone’s guess. Maybe they had a medical emergency or they were distracted. But don’t worry, the Twitter mob has already come to the conclusion they’re bad because they drive a Dodge. See, every problem is easier to solve when you think in stereotypes.

Speaking of stereotypes, there’s one for Tesla drivers and green seems to fit it amazingly well. First, they have a general disdain for humans doing things with their own two hands. The initial tweet starts off “typical human precision at its finest, I guess?” Assuming green is an actual human, that type of self-loathing is tiresome and not healthy.

They go on to say “sometimes you just can’t do anything about the upcoming accident it seems.” Yep, that’s an obvious conclusion most people arrive at early in life. Sometimes you can do everything right and someone else causes an accident which adversely affects you. It sucks but you move forward, or you take to Twitter for a group therapy session and ripping on a specific demographic.

It appears green user doesn’t own the Tesla in question, but instead was sent the footage after the wreck. What’s also apparent is green doesn’t know what they're looking at. Geen thinks it’s weird how the “rear quarterpanel (sic).. is ripped off like foil and gets stuck to the Dodge.” While it’s a little difficult to be sure from the footage, it looks like the initial impact knocked the paint off the Tesla’s rear quarter panel in one giant sheet, which is of course the sign of a quality paint job. For all the mad Tesla fanboys reading this, that's what we call sarcasm.

Kind of weird how what looks like rear quarterpanel (or what is it, I have no other ideas at least, Teslas were not made out of fabric last I checked and Dodge did not have it attached before contact) is ripped off like foil and gets stuck to the Dodge. pic.twitter.com/gxTCxzy6m5

And this is why Tesla build quality has been heavily scrutinized in the auto industry, not because they’re electric cars but because they’re made in questionable ways. When it comes to collectability that has an impact, and while there have been a few collector Teslas out there, for the most part cutting corners in the manufacturing process has worked against making them a force in the collector market. Maybe that will change in the future.

And then to top it off, a wheel broke off it seems?
(not saying it's Tesla fault, obviously it's post accident and all that)

There was a similar impact accident yesterday with wheel intact - just a work of chance I guess?https://t.co/0FxB4nA3jV pic.twitter.com/xzD8bZevRh

Green also seems perplexed the Tesla’s rear passenger-side wheel broke, like wheels are impervious to damage. Wheels break in accidents, but green observes a wheel didn’t break in a “similar impact” they saw the day before. The physics of car accidents can be complicated since there are many factors involved, but green chalks the difference up to “a work of chance.” Don’t worry, green started Google sleuthing and found a stock photo of a Honda Civic with rear quarter panel damage, concluding after a forensic analysis of the single photo that what happened to the Tesla is “sort of a common enough outcome on all makes.” We can’t make this up if we tried.

Here are some bonus videos showing just how bad Tesla paint is. Enjoy.