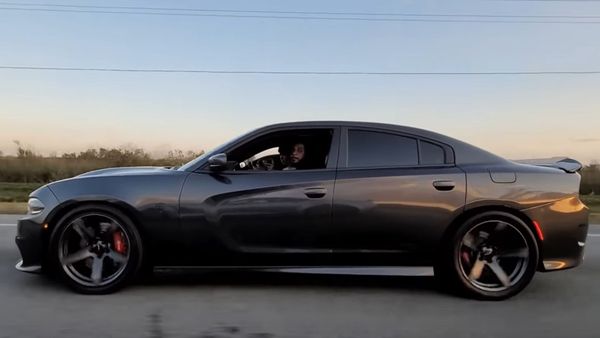 It’s claimed the first car race happened when the second car was made and for good reason. There’s always the big question about which car is faster in a race, something which seems simple to the non-car people but to enthusiasts we know the question is much larger and more complex. Sure, you can be like Dominic Toretto and give some oversimplistic explanation that “winning is winning” or you can go the Ricky Bobby route of extolling “second place is the first loser” but we all know the type of race, what’s been done to a car, etc. are all a factor.

With that in mind, you get to see a C7 Chevrolet Corvette Z06 and Dodge Charger Hellcat duke it out in two races. Both cars have been modified, although neither one has been heavily tweaked, but it’s important to know they’re not stock.

The Z06 has an aftermarket intake but hasn’t been tuned. It also has an automatic transmission, which depending on your opinion is either awful or good. At least that means both cars have automatics, although the two transmissions are quite different, a factor non-gearheads don’t really think that much about, even though a transmission has a tremendous effect on acceleration.

As for the Hellcat, it has a pulley upgrade, supposedly it’s “slightly smaller” than the OE part. It’s also been tuned and is running 3.09 gears. Before you start thinking it’s not fair the Mopar has more mods, keep in mind it’s about 1,000 pounds heavier thanks to the backseat, rear doors, etc.

Both races involved rolling starts, the first from 50 mph and the second from 60 mph. Everyone’s going to have an opinion on that and whether they should’ve done any races from a standstill. Also, we’ll add before you watch the video that we don’t endorse them racing on public roads, so please don’t imitate their stupidity. Take it to the track and keep it legal.