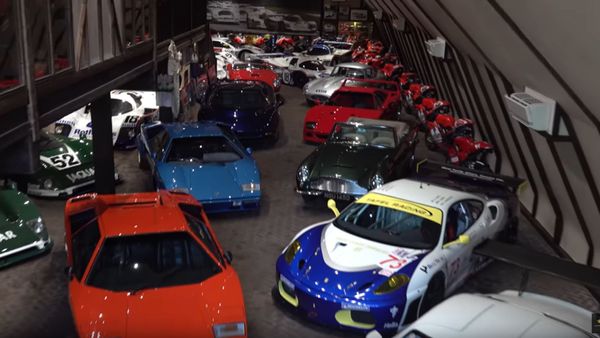 There are so many supercars and race cars packed in there…

We see quite a few impressive car collections, so it takes a lot to impress us. And while some people prefer American muscle cars(who can blame them?) the array of European supercars and race cars in this collection housed in the United Kingdom is definitely something to behold. Not only is this a whole lot of automotive eye candy in a single location, a number of these cars are incredibly rare.

Obviously, if you have a restored, famous race car it’s often a one-of-a-kind vehicle and with plenty of historical cache to make it a worthwhile investment. Not only that, owning a vintage racer means you can take part in classic car races, if that’s your sort of thing. The owner of this collection seems to really enjoy his race cars, since he has quite a few impressive examples.

There are a lot to cover and you can see them all in the video accompanying this article. One of the highlights is a Mercedes-Benz CLK GTR, the racer that looks like the cross between a Fortune 500 CEO’s limousine and a McLaren. It’s apparently the final one built, so that makes it even more interesting.

Also in the collection are two Rothman Porsche 962s. One would be amazing, but two are astounding. The guy also owns a Rothmans Porsche 956, so clearly he has impeccable taste as well as money. A more modern but still impressive Toyota 88C is also housed in the collection, a Group C car with a solid reputation.

The supercars in this collection are no less eye-popping, like a Ferrari F40 with low miles and a nice-looking Jaguar XJ220. Being British and having good taste, he’s amassed some interesting Aston Martins, in particular a Short Chassis Volante. If you don’t know, it has the same chassis as a DB5 but has some of the DB6 components, most notably the lights and bumpers. A mere 37 of these cars were made, so they’re incredibly rare and valuable.