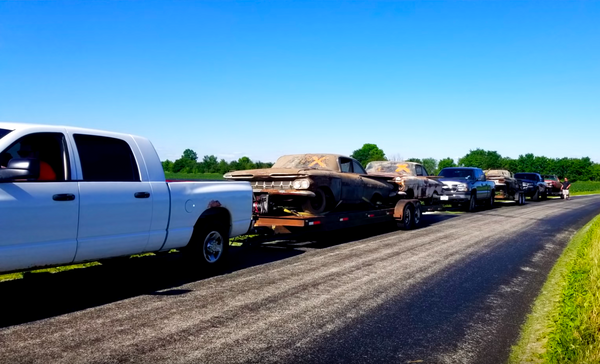 Wait until you see this hoard of Impalas!

The Impala name was first used for the top of the line Chevy Bel Airs in 1958. Despite only having one year of production the first generation Impala was partially responsible for pushing Chevrolet through the recession year. In 1959, the Impala was completely redesigned, cementing the car's role in the Chevy lineup with an iconic design. Unfortunately, the second generation only lasted a year longer than the first and each year was slightly different. Both model years featured an iconic design but the most popular among enthusiasts is probably the 1959 Impala or the Cat Eye Impala.

Almost 500,000 Impalas were built in 1959 and yet they are still not that easy to find nowadays and the ones you can find are parts cars at best. In a simple case of being in the right place at the right time, Ryan with Iowa Classic Cars stumbled on one of the largest Impala barn finds we’ve ever seen. In total he recovered five cars and among the haul were three 1959 Chevrolet Impalas.

As the story goes, Ryan sold someone named Brad some 1960 Impala parts four years prior. After getting some more Impala parts from someone named Paul in June of 2020, Brad informed Ryan that Paul may be interested in parting with some 1959 Impalas. It turns out that Paul had acquired five cars from junkyards in the 1970’s and 1980’s, and being in his 80s now, he was looking to sell all of his cars.

At first glance these cars do not appear to be in usable condition. Parts are missing, some have been wrecked, and all of them are covered in rust. Ryan didn’t even hesitate to pull the trigger on the all or nothing deal and with a little help from his friends he was able to get all of the cars hauled back to his shop. We can’t wait to see how the factory black 1959 Impala Convertible turns out.