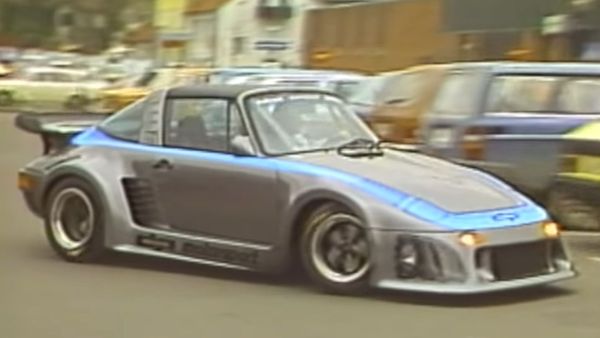 Here’s a retro review to help jog your memory.

Back in the 1980s plenty of people lusted after a Porsche, any Porsche. And while the 911 was king of the lineup, that simply wasn’t good enough for some people. Maybe they were performance junkies or someone who always had to have the best toys, but for those people the Porsche DP 935 was what they had to own. You can see the car in action as well as hear MotorWeek’s review from back in the 1980s by watching the video accompanying this post.

The name of this modified Porsche came in part from the 935, the motorsports version of the Porsche 930 which debuted in the 1970s. Achieving all kinds of success on the track, the slant-nose aesthetic and other elements from the car absolutely titillated enthusiasts.

Perceiving an opportunity, DP Motorsport, which had launched just in 1973 and had success with Porsche 911s in races and made the body panels for the 935, decided to offer to consumers the look of the legendary race car for their road-going rides. It was a proposition those with plenty of money to finance it found irresistible.

Transforming each car by hand was a small shop located in Sweden. As you can imagine, such work doesn’t come cheaply, so having a DP 935 was a major status symbol in the right circles.

While they were at it, customers would add on more than just the custom 935 look to their Porsche 930. Many of them received a huge power bump in the neighborhood of 400-horsepower. By today’s standards that’s pretty good, but in the late 80s it was jaw-dropping.

It’s fun to hear MotorWeek act astounded at the performance specs of the DP 935, like how it goes from zero to surpassing the legal US highway speed at the time in under 4 seconds. Equally as entertaining is to hear how the price tag of the customization cost almost $100,000. Today you’re going to pay about twice that much for one of these cars, if not more.