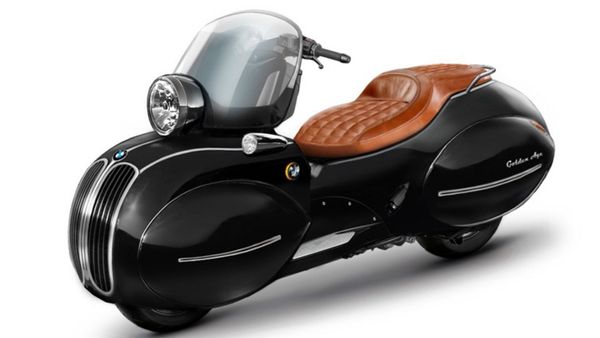 This concept bike hearkens back to the pre-war era.

These days there’s a big push in the motorcycle market toward nostalgia. What people mean by “vintage styling” can vary big time, but few come even close to the level of what Nmoto has been doing. The South Florida shop has been turning heads since last year with the Nostalgia, a BMW R nineT seriously worked over to look more like the brand’s legendary R7.

That’s quite the magic trick, so it’s understandable why so many have been eagerly awaiting the next reveal from Nmoto. That has finally arrived in the form of the Golden Age. The concept bike is pretty jarring to see at first glance since the shop went in a direction few anticipated, yet it’s also a breath of fresh air at a time when there’s a deluge of retro café racers.

For the Golden Age, Nmoto turned the clock way back to the pre-war era for inspiration. Chiefly influential in its lines was the 1936 Henderson Courtney Prototype, while a new BMW C400X provides the bones upon which this work of art will be built.

As Nmoto describes it, the pre-war time emphasized a “balance of speed, style, and skill.” With a heavy dose of Art Deco design, there really isn’t anything else like this motorcycle on the road today, so anyone with the bravery and bank account to buy one will turn many, many heads.

We like how the Golden Age has been designed by Nmoto to mimic the giant grille included in the 1936 Henderson Courtney Prototype. The twist is this grille has been divided into two kidneys, a familiar quality to BMW enthusiasts. In fact, one could argue whether or not it’s more stylish than some of the newly-revealed Bimmer production cars’ grilles. We think it is, thanks to the throw-back feel in the mix.

Just like we’ve seen with other Nmoto bikes, the level of detailed, high-quality craftsmanship included on the Golden Age is reason enough to consider buying one. What we see for now are renderings, but when the first prototype is officially unveiled next spring, we’re sure it will be every bit as impressive as the Nmoto Nostalgia and the bespoke Presidential Edition.

Don’t expect to win many races with the Nmoto Golden Age. It’s powered by a 2020 BMW 350cc engine, so there’s only 35-horsepower on tap. While not built for flat-out speed, that engine sits low to the ground, meaning a lower center of gravity for better handling, so it should still be a fun bike to ride in urban areas where maneuverability is of high importance.

Of course, we suspect nobody will be interested in the Golden Age for its performance aspects. This bike has such unique styling for anything modern, whether on two, three, or even four wheels that it will no doubt easily carve out a comfortable niche in the market.

Nmoto is taking reservations now for the Golden Age. You could wait until the prototype reveal next year, but we honestly aren’t sure if this is will have a limited production run or not.